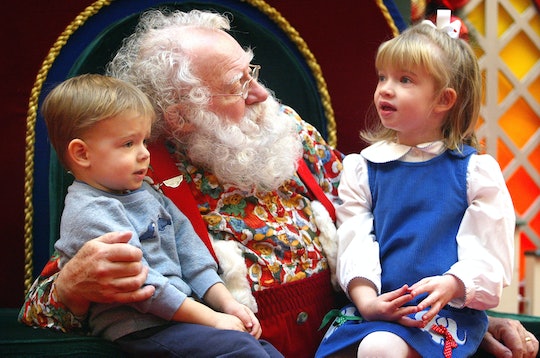 Should Kids Over 5 Believe in Santa? An Expert Weighs In

The time in life when we're allowed to indulge in magical thinking is terribly short, so when it comes to believing in Santa, many of us are more than willing to feed our kids' fantasies. But how long should this festive fantasy last? Should kids over the age of 5 believe in Santa? In some ways, this tradition is just as hard for parents to give up as it is for kids. Not only does embracing the beloved myth mean plenty of adorable photo ops and the excuse to polish off a plate of cookies as evidence of Kris Kringle's visitation, it also introduces an element of utter enchantment to the holidays that gets the whole family in the spirit. (Oh, and there's no phrase in the parenting lexicon quite like "Santa's watching" for inspiring good behavior.)

Still, all good things must come to an end, and faith in Father Christmas is no different — but the "when" might not be so important. At some point or another, your little one will start to question the physics involved in a portly old man descending a narrow chimney. Or another kid at school will start a conspiracy theory involving the impossibility of worldwide sleigh travel. Or, more likely than not, your child will stumble upon your "secret" hiding spot for unwrapped gifts. But what if this fateful moment comes later rather than sooner?

It's safe to say that this isn't something most parents worry about until their kids start school; after all, tots who are still mastering the art of tying their shoes don't necessarily need a lesson on the realities of life just yet. But once kindergarten rolls around and children start developing a firmer grasp on such concepts as cause and affect (and the fact that animals without wings don't typically take flight), we might start to wonder if the whole St. Nick thing is really appropriate anymore. Plus, wouldn't it be better for us to break the news than another kindergartener who got the scoop?

"Some parents have expressed concern to me that their child is 'too old' to believe in Santa and they fear he'll be made fun of," Maureen Healy, author of Growing Happy Kids and child development expert at Psychology Today tells Romper.

But whether or not we take it upon ourselves to break the news, there's no question that the truth will inevitably come out.

"What I know for sure is that children discover the myth of Santa or Saint Nicholas when they've cognitively deduced that it's mom wrapping gifts or something else. It's simply part of maturing and cognitive development to eventually decide Santa is played by one's parents."

And in the meantime, believing in the bearded man is about more than singing catchy carols and writing lists. It's perfectly normal, for one thing, and it's also something we can take with us into adulthood, sort of.

"Children that believe in Santa simply believe in the magical side of life," says Healy.

"This is a key theme throughout many people's lives, which we can see continues with books such as Harry Potter and The Lightning Thief. Some possible benefits of believing in Santa include: A child using his imagination, reading stories, and getting actively involved in a yearly ritual (for example, placing cookies out for Santa). These are all feel-good activities."

Nothing wrong with feeling good at the holidays, no matter how old we are. Which is why we don't need to be particularly concerned about the exact age of our kids when we tell the the truth about Santa.

"Every child is different and there isn't one age," says Healy.

"But I would say most children in middle school are certainly aware of who's playing Santa, and might still pretend to believe to 'receive gifts' but that's their choice. Some families say, 'You must believe to receive' and in those families I would still believe as an adult!"

If you're trying to figure out whether or not your child is ready for the big reveal, trust your instincts.

“I think most parents have a good feel as to when their children can accept the truth,” Dr. Matthew Lorber, a child psychiatrist at Lenox Hill Hospital in New York City, told LiveScience.

For example, Lorber suggested, you might try asking your kid if he still believes. If he says yes, hold off until he starts expressing doubts on his own.

As a mother of two older kids who figured out Kringle's origin story on their own, years ago (when they were around 5 or 6), I'm loving every second of my 3-year-old's current Santa obsession. I know all too well how brief it will be, ultimately. And Christmas just isn't as much fun when we have to write "From Mom" on those little tags!

More Like This
If Your Kids Love Their Elf, You Don't *Have* To Put Him Away On Christmas
20 Ways To End Your Elf On The Shelf For Good
30 Great Non-Toy Gift Ideas For Kids
15 Elf On The Shelf Printable Letters From Santa