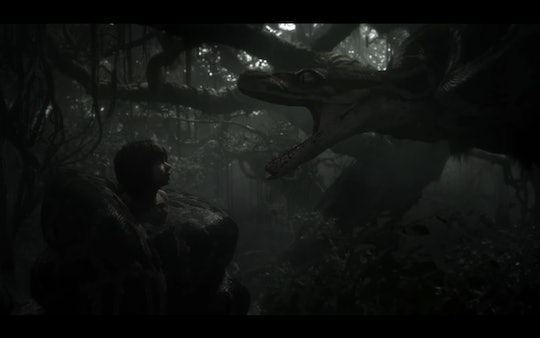 Should Kids Watch 'The Jungle Book'? The Disney Remake Will Be Shockingly Lifelike

Disney's classic Jungle Book was a heartwarming story that appealed to all of my childhood fantasies: being able to talk to animals, living in the jungle, and running around barefoot all day. The idea of a new, remastered Jungle Book created by the people behind The Pirates of the Caribbean and starring a cast of A-list actors is an appealing prospect, and many parents are probably seeing it as a prime opportunity to introduce their children to what might have been their own childhood cartoon favorite. But should kids be watching The Jungle Book? It depends who you ask, but it is a Disney movie created with kids in mind.

If you're thinking that the 2016 movie will be just like the 1967 cartoon, with the lovable Baloo, wise Bagheera, and orange-knickered Mowgli, you might want to catch the trailer. Not only have animated films come a long way, but Disney has revamped the story. This film-and-CGI hybrid gives characters' and villains' backstories, making it believable that lion Shere Khan would want Mowgli dead and that Mowgli would be gullible enough to follow Kaa the snake. According to reviews, The Jungle Book is a masterful piece of storytelling, and the visuals and surround-sound of theaters make the movie pop.

As for whether The Jungle Book is kid-friendly, it likely depends on your child's fear factor. Variety recently watched the film, and reviewer Andrew Barker wrote, "Maintaining the buoyant heartbeat beneath all the digital flash, [director] Favreau never loses sight of the fact that he’s making an adventure story for children." He also described one scene as stopping "just short of something that would trouble children’s sleep."

A Polygon review by writer Julia Alexander seemed to agree with this assessment:

"While you won't jump in your seat from any of the darker, violent scenes, there's definitely a sense that this movie wasn't made for children in the same way the former Disney cartoon film was. The Jungle Book, while definitely still a children's movie, goes back and forth from providing the type of entertainment young kids (between the ages of four and nine) will appreciate and adding just the right amount of intensity in other scenes that adults will enjoy."

Not everyone agrees that Disney's latest animation is made for kids, however. According to The Guardian, Indian censors slapped a PG rating on the film, saying the 3D, realistic animals were "startling" and warning parents to consider the potential fear factor of the visual effects. The official MMPA rating in North America for the film is PG, as well, for "some sequences of scary action and peril."

Take a look at the trailers and judge how your child feels about animals. If he or she isn't down to pet the family dog, they might not be wild about some eerie animals popping out of the screen at them. But if they're fairly stoic when it comes to slightly scary books or movies, and they're excited by Mowgli's adventures, then go enjoy a night out at the movies.