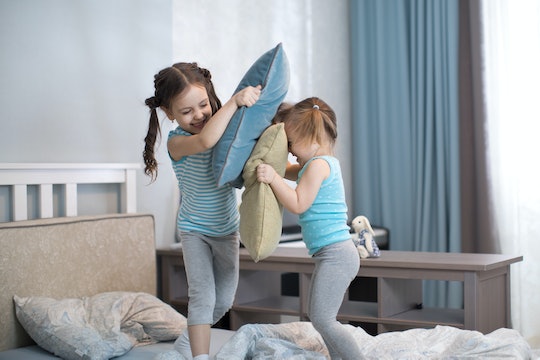 I remember my son's first pair of "big boy underwear" — they were emblazoned with the characters of Yo Gabba Gabba. Yes, he wore these all the time, as they were of course his favorite pair. He even wore them to bed. But was I wrong to allow that? Did his parts need breathing space at night? The broader concern over should kids wear underwear with their pajamas or not honestly never crossed my mind.

The research over whether or not underwear should be worn to bed is conflicted at best. There are those in the camp of "definitely do not wear underwear to bed" and others are more circumspect, like this report from Live Science that noted it has certain benefits in certain situations, but overall, it's not a huge concern. And it might also be different for genetic males as it is for genetic females, as one report in Science Alert noted that men have a procreative cause for concern about wearing tight undergarments at night and science suggests loose boxers or commando. But is that important for boys or just men?

The reason stated as to why men should not wear underwear at night is that it adversely affects sperm production by confining and heating the testicles. This doesn't matter for boys who don't start producing sperm until puberty, typically around ages 10 or 12, according to Planned Parenthood. Therefore, the only conceivable reason to keep your kiddo commando at night would ostensibly be to air out the area, which is the same reason given for genetic females needing to go panty-free. The thought is that the trapped air, heat, and moisture can lead to infection and other related problems.

I wanted a definitive answer as to whether your kids should wear underwear under their pajamas, so I spoke with pediatric nurse practitioner Jamie Nguyen DNP PhD. She tells Romper that it's a matter of personal preference. "If you go without, and your kids know you do, there's no reason for them to wear underwear at night unless they like it." There's also no strong reason why they shouldn't wear it either. She says that kids can get similar genitourinary infections to adults, but usually without the same frequency or severity. The only reason to go commando is if they're prone to urinary tract infections or candida.

Nguyen says it's more important that you encourage good bathroom habits and hygiene rituals than to concern yourself with their underpants at night. "Work with your kids on how to wipe properly. For girls that means front to back. Work with your kids to know how to properly clean and treat their genital area, and try to keep it dry," she says. If your child wears Pull-Ups or other training pants at night, consider waking them a few hours after putting them to sleep to go to the bathroom to decrease the amount of output in the pants which can lead to irritation and rashes.

In the end, much like most of parenting, it's a matter of personal preference and choice. I wear underwear and so does my daughter, but now that my son is out of his Muno underwear, he prefers just his pajama bottoms or boxer shorts, much like my husband. It seems as though there will always be debate around this issue which turns out to be pretty much a non-issue. Honestly, can you blame your kids for wanting to keep their underwear on? I mean, my daughter has Wonder Woman and Black Panther underoos. They're too cool to give up for 10 hours per night anyway.