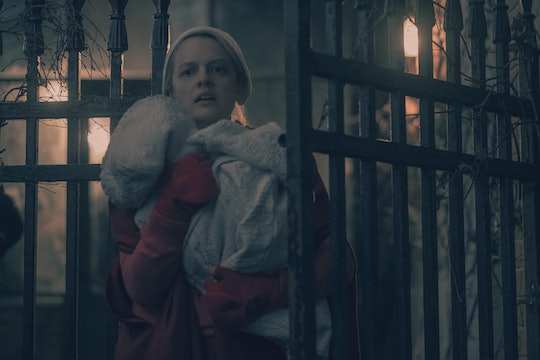 'The Handmaid's Tale' Can Be An Emotional Watch For Some Moms

If you’ve been watching the Handmaid’s Tale, chances are you’ve found yourself fuming, cringing, and crying over the appalling injustices depicted on the show. But some of the hardest scenes to watch are the ones where mothers are forcefully torn away from their children. These heartbreaking moments can leave some people emotionally raw and vulnerable, especially mothers. So, that begs the question: should moms watch the Handmaid’s Tale?

Some moms might find the show difficult to watch, while others may be just fine with it. There is no one-size-fits-all answer, so ultimately, moms should do whatever they feel comfortable doing. As a mom myself, I’m perfectly ok with watching The Handmaid’s Tale. In fact, I think it’s one of the most important shows on TV. There is a dangerous lack of accountability, transparency, and compassion within this current administration and I think the series acts as a crucial reminder that women need to continue to fight for equality, no matter how hard it is.

But I know plenty of other moms, mine included, who have a really hard time dealing with the emotional and physical torture the characters face in each episode. The show is based on Margaret Atwood’s 1985 novel, The Handmaid’s Tale, and is set in a dystopian future where a lack of viable pregnancies in the population leads to a takeover of the United States government. The new militarized government, which calls itself Gilead, forces all the child-bearing women in the state to become handmaids — women who are only meant to breed for the rich commanders of the government.

The handmaids are raped by these commanders and after getting pregnant and delivering their babies, they are forced to leave the newborns behind with the commander’s family. The handmaids are then forced to move on to the next house, where they are subjected to this torture all over again. Any people who resist Gilead’s rules are killed or sent to a radioactive prison land.

The series is centered around a woman named June (Elizabeth Moss), who was forced to give up her young daughter, Hannah, when Gilead took over. She was stationed at the Waterford home, where she was raped by Commander Fred Waterford (Joseph Fiennes) and his wife, Serena (Yvonne Strahovski). When June gives birth to a baby girl, Nichole — who unbeknownst to anyone is the driver, Nick’s (Max Minghella’s) child — Serena and Fred take the child for their own.

Aside from June, there are many other characters on the show whose children were taken away from them. Some moms took to Twitter to share their emotional experience watching these scenes, and others questioned whether or not they could handle them.

As hard as it is to see mothers and children being separated — whether it’s on TV or at the border — The Handmaid’s Tale does a great job of highlighting the fiercely protective and determined fabric mothers are made of. In the Season 2 finale, when June is presented with the opportunity to escape Gilead and flee to Canada, she sends her newborn Nichole, but stays behind with the hope that she might still be able to save older daughter. This is what a mother’s sacrifice looks like — giving up your own livelihood to see your children thrive.

So while The Handmaid’s Tale does depict a grim, disturbing dystopia, it also shines a light on the inner strength and resilience women possess. Whether or not you should watch the show is a choice you need to make for yourself, because if there’s one lesson to be learned from Atwood’s story, it’s that a woman’s choice must be supported and respected no matter what.