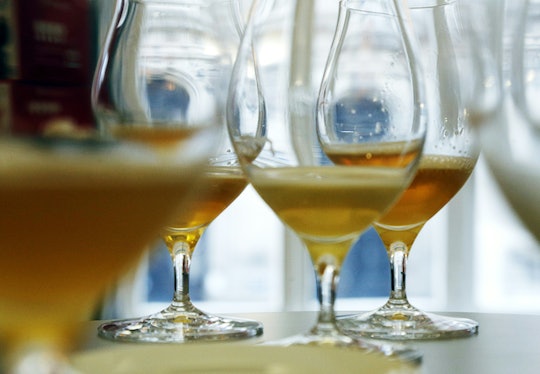 Should Parents Let Kids Have Sips Of Alcohol? Study Says It Could Lead To Substance Abuse

Despite the legal drinking age of 21 in the United States, plenty of young adults, teens, and even younger kids have had their first taste of alcohol well before they turn 21. But should parents let kids have sips of alcohol at all? A new study out of Australia attempted to examine this question in further detail, with some surprising results. Published in the March issue of the medical journal Pediatrics, researchers from the National Drug and Alcohol Research Centre at the University of New South Wales examined "Parents Who Supply Sips of Alcohol in Early Adolescence." Turns out a sip could tip the scales into lifelong alcohol abuse — and that's not an exaggeration of the findings.

Dr. Monika Wadolowski, lead author on the study and epidemiologist, remarked on their unexpected findings: "The whole issue of sipping came as a surprise," she said to The New York Times. According to the study, the results revealed that parental supply of alcohol was "associated with increased parent-report of peer substance use, increased home alcohol access, and lenient alcohol-specific rules." The study sought to distinguish "sips" versus the consumption of entire drinks by adolescents, something not previously delineated in other similar studies on youth and adolescent consumption of alcohol.

The study's conclusions found that parents who thought their child hung out with other kids who drank were more likely to give their kid sips of alcohol. Additionally, "Parents may believe supply of a small quantity of alcohol will protect their child from unsupervised alcohol use with peers." But that isn't always the case, as John E. Donovan, a professor of psychiatry from the University of Pittsburgh noted in a 2014 study, "Antecedent predictors of children's initiation of sipping/tasting alcohol." Speaking to The New York Times, Donovan said:

Child sipping is related to earlier initiation of drinking, which is a risk factor for a lot of other problem behaviors. Parents should not be providing alcohol to their kids.

Either we've all been experienced this to some degree, or have at least seen these classic scenarios play out in televisions and movies: The dad that offers his young son a sip of beer to be met with a disgusted grimace upon tasting it. The cool mom who opens up the liquor cabinet for her teenage daughter's house party. The Euro-chic couple who offers their petit bébé a sip of Bordeaux at the dinner table.

My own son got his first taste of wine (a 2008 Cabernet Sauvignon because ain't no way my baby drinks cheap wine) off my finger when he was a month old at his bris. As a Jewish mom, alcohol — particularly wine — is a part of the religious life in our house, from the Friday night Shabbos blessing over the wine to the four cups of wine at Passover seder. My husband is an avid home-brewer, too. Alcohol is by no means some kind of forbidden topic in our home. My son totally knows that wine is "Mommy juice" and beer is "Daddy juice." And as much as I've ingrained "Little boys don't drink soda" into his little toddler brain, he says the same of wine and beer, too.

But am I a bad mom because I've let my son have a few finger-licks of wine? Am I setting my son up for a lifetime of alcohol abuse?

Wadolowski noted that parents who gave their children access to alcohol were more likely to have "strict rules" and "good parenting practices" — and their study revealed that parents were likely to supply alcohol to their children when they thought their children's friends were consuming alcohol, too. So, a bit of that "cool mom/dad" scenario. When compounded with other research, such as Donovan's 2014 study, the case could be made that even little sips might lead your child down the wrong path later in life.

Back to my question: Am I a bad mom? Right now, research says yes, even with good parenting practices and strict rules — and even though my toddler isn't stumbling drunk to pre-school. I think it's important that parents don't shy away from the subject of alcohol with their kids: Taboos don't progress intelligent, informed decision-making.

I'd like to think I'm not a bad mom — despite what the research might say — but rather the kind of mom who takes an active investment in her child's health and wellbeing with the kind of relationship where I can have that kind of open dialogue as my son gets older.