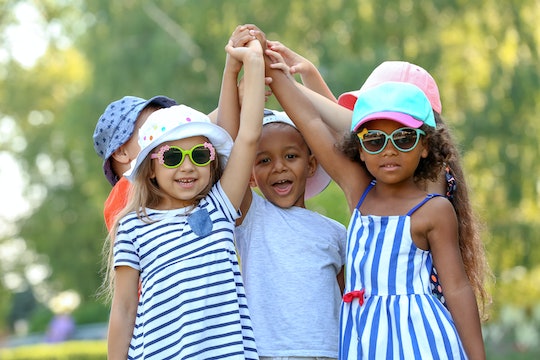 Many Parents Would Prefer A Much Shorter Summer Break, According To Survey

Ah, sweet summertime. School is out, kids are home, and outdoor activities abound. Though you may have spent your childhood longing for these easy, breezy months, come adulthood when you're juggling a job and potentially multiple children at home at once, summertime takes on an entirely different meaning. In fact, according to a new survey, parents would actually prefer if summer break was shorter — specifically, they'd like it to be less than two weeks long.

Certainly nobody wants to be a buzzkill when it comes to summer fun, so a seldom discussed part of parenthood is that summer break is difficult, whether you stay at home or go to work. You either need to find ways to entertain your kids all day, or find someone to take care of them while you're at the office. Either way, it does present a host of unique stressors, and for many parents, it's enough to wish that the school year were a bit longer.

Last year, as People reported, OnePoll conducted a survey that's recently resurfaced once again, in which researchers polled 2,000 parents about summer vacation with their children. Of those contacted, 58 percent said they were "stressed" keeping their kids busy and entertained and 75 percent admitted that they were "ready for their children to go back to school" come early September.

Perhaps most significantly, the survey, which was commissioned by Groupon, also found that parents were ready for their kids to go back to school after about 13 days of summer vacation, which is just under two weeks of off-time.

Though it may seem harsh when you consider the rigorous demands, academic, extracurricular and social, placed up on kids in school, as well as the general enjoyment that summer can bring, however, a shorter or nonexistent summer is actually not a new concept.

The reality is that summer break is not a net positive for children. According to The Economist, due to something called "summer learning loss," it can actually impede a child's ability to retain more information, and can make social mobility more difficult.

In fact, according to the City Mission of Cleveland, for families experiencing poverty or homelessness, not having school also results in a lack of routine and schedule, potentially fewer if any warm meals eaten, and potentially the issue of having to stay in unsafe environments, given a parent's work schedule, or the care taking available to the family at the time.

Summer vacations as we know them exist because in the 19th century, prior to modern air conditioning, buildings would simply be unbearably warm for children to stay in all day, as explained by The Week. Given that such is not the case anymore, it seems that many are questioning the need for a super long break.

In the end, it seems that there may be reason to potentially reform the way we approach summer vacation. Though it's often thought of as a much-needed reprieve from a rigorous school year, two weeks of vacation — as a typical job would offer — alongside year-round schooling might provide more comprehensive learning, and more structure and routine so that kids can thrive long-term.

More Like This
Michigan Right-Wing Group Wants To Erase LGBTQ+ Sex Ed
10 Great Podcasts That Will Keep Your Kids Entertained On Your Next Family Road Trip
Teacher Shot By 6-Year-Old Student Told School He Had A Gun, Was Told To "Wait"
Florida Teachers With “Unvetted” Classroom Books Could Face Felony Charges
What Parents Are Talking About — Delivered Straight To Your Inbox