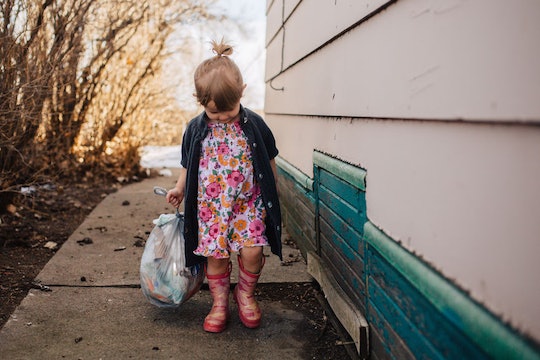 Here's How Doing Chores Affects Your Toddler Later In Life, According To Experts

Toddlers have so much energy. From the moment they wake up to the moment they finally fall asleep, they're generally on the go non-stop. While they may want to focus all that energy on playing with their toys and running around outside, you can also redirect some of it toward learning valuable skills. There are lots of chores toddlers can do around the house, and it can be so good for their development to make it part of their routine.

Research has shown that kids who are responsible for chores from a young age are more likely to be successful later in life, according to the Boston Globe. The paper reported on studies from the University of Minnesota and Harvard University which both found positive benefits, ranging from greater education and career achievements to better mental health and personal relationships. Chores help kids develop a strong work ethic and can also teach them the value of teamwork and helping others, as psychotherapist Amy Morin noted on Verywell Family.

Dr. Erina White, Clinical Services Director and VP of Parent Services for Mightier and a clinical researcher at Boston Children’s Hospital, says it's never too early to start teaching your toddlers about tackling chores and sharing responsibilities. But she cautions that you'll need to use your best judgment on which chores are appropriate for them. “You have to take into account your particular kiddo and where they’re at.” Handing off a chore that's simply too much for a child can be discouraging, and turn them off the idea.

There are tasks that toddlers as young as a year old can help out with, White says, even if it's just putting their toys back in the toy box when they're done playing. The Montessori Notebook suggested putting soiled diapers in a trash bin and dirty clothes in the hamper as tasks for 12 to 18 month olds. Toddlers who are 2 or 3 years old, meanwhile, could be ready to set the table, help make beds, load and unload laundry, and unpack groceries (with some adult supervision, of course).

Dr. White cautions that not all kids will enjoy the idea of doing chores. "Some are just very, very interested in helping out and being a part of things, and others are much more interested in their own world and want to play by themselves.” White says that keeping the experience positive is key, and cautions against using chores as a punishment. “When you couple cleaning up with something negative or punitive, it’s going to have that connotation for a very long time, if not ever. But when you couple it with a song and a game and something fun, then it becomes something that is in their mind as help and useful and fun.”

Doing chores can also be a confidence booster. “Every kid feels good when they accomplish something,” says White, and that's really what it's all about. You could do everything faster, better, and without nagging anyone, but then your child misses out on the opportunity to learn a life skill. You may have to re-do whatever job you've assigned them yourself afterward, but you can consider the extra work an investment in your child's future.