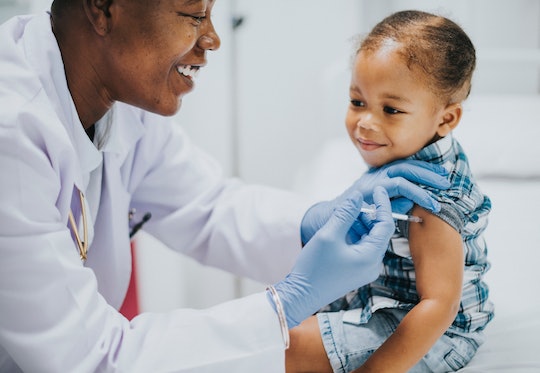 Here's Why Most Toddlers Should Get The Flu Shot, According To Experts

October is full of scary stuff — horror movie marathons on TV, spooky Halloween decorations, Columbus Day — but perhaps the scariest event of all is the beginning of flu season. Fortunately, there's a vaccine for that, but should toddlers get the flu shot? The question is understandable, but according to experts, the answer is clear.

The flu is a respiratory illness caused by influenza viruses and, according to the Centers for Disease Control and Prevention (CDC), can cause mild to severe symptoms that can include fever, chills, cough, sore throat, body aches, and fatigue. Most people who contract the virus will recover within a week.

But Dr. Jack Maypole, a primary care pediatrician and the director of the Comprehensive Care Program at Boston Medical Center and member of the Educational Advisory Board for The Goddard School®, tells Romper that parents and caregivers should not dismiss the illness as harmless.

"While influenza, or 'flu' may occur as a mild illness, it can be particularly nasty — or dangerous — in younger children or anyone with a complex or chronic illness including diabetes, asthma, neurological problems, or former premature infants," Maypole says. "Flu infections cause up to 20,000 hospitalizations in children under 5 each year." Indeed, according to CDC data and estimates, the flu has likely resulted in between 140,000 and 960,000 hospitalizations and 12,000 to 79,000 deaths annually since 2010.

Dr. Mihir Patel, a UCHealth family medicine physician, is unequivocal in his recommendation, which is also that of the CDC. "After six months, everybody should get the flu shot," he tells Romper via phone. Patel points out that children are particularly susceptible to the illness ("Their immune systems are not as strong.") and that the more members of the family who get the vaccine, the better protection you will all have against the virus. He recommends setting some sort of reminder to get your annual vaccination every fall, before flu season enters full swing, but that even getting it in January, as flu season begins to wind down, still offers protection.

But why do we need the flu vaccine every year? Patel explains that not only does the flu vaccine wear off over time, so that one's immunity wanes, but that the flu itself changes all the time, requiring an annual change in the flu vaccine.

"Every year, the Centers for Disease Control and the World Health Organization gather data to figure out what flu strains are active," Patel explains. "It may have mutated, there may be other strains, so just because you got a shot last year doesn't mean it's still going to protect you this year."

Patel says the common concerns caregivers have about the vaccine itself isn't reason to skip it entirely. Unless someone is younger than 6 months old, or has had a life-threatening reaction to the flu vaccine in the past, the benefits of the shot outweigh the risks, the most common of which is pain or redness at the injection site. Even those with egg allergies, who previously have been warned to steer clear of the shot, are now encouraged to get vaccinated. As reported by the CDC, in a Vaccine Safety Datalink study of more than 25.1 million doses of vaccines "only 33 people had anaphylaxis."

So even if you or your child have a serious egg allergy, Patel says you can still get the shot, but it should be administered by a doctor who can monitor you for symptoms. (In other words, you shouldn't get it at a clinic or local pharmacy, which is a convenient option for many.) He also states that despite the common misconception that the flu vaccine can cause the flu, it is "virtually impossible," since the shot does not contain a live flu virus.

Patel does say that, unfortunately, the organizations that develop the annual flu vaccine can and do miss the mark from time to time. "Sometimes the flu vaccine is only 20% efficacious, but it's still beneficial." He points to evidence that shows, even when a vaccinated person contracts the flu, the severity of the disease is diminished. Years with less effective flu vaccines, he says, still show decreased levels of flu-related hospitalizations. Moreover, most years, the vaccines produced are 40-60% effective, per the CDC.

We all want what is best for our babies, and it's normal to worry about, well, everything, especially when our little ones are still so young and fragile and basically helpless. But think about the flu vaccine as carrying a cheap umbrella in your bag when there's around a 20% chance of rain (those are your chances of getting the flu, according to WebMD): in the event that it does, in fact, rain, that umbrella is likely to keep you from getting wet. There is no risk in carrying the umbrella. The umbrella will not make it rain or cause you to get wet. The umbrella is not poisoning you and, best of all, if someone is caught without an umbrella (a baby, for example, who can't hold up an umbrella yet, or an old person who may have difficulty), you can share your umbrella with them.

More Like This
6 Mindfulness Activities For Kids
Banana Boat Sunscreen Has Recalled Products That Were Found To Contain Benzene
New York Can End Religious Exemptions to Vaccine Mandates, Says A Federal Appeals Court
How To Avoid & Treat Lyme Disease