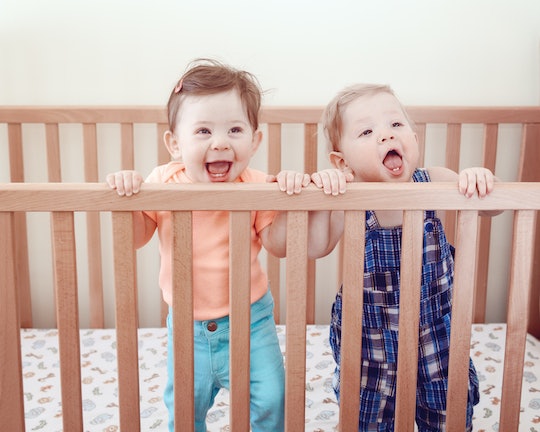 Ah, twins. You planned for one baby, and suddenly you've got two on your hands. You're buying twice the amount of diapers and wipes, you've got two high chairs in your kitchen, and you're still figuring out how to carry two carseats. When something can be shared, your twins are freakin' sharing it – and they should probably get used to it. And since they've already cozily shared your womb, should twins share a crib? Sleeping together can be comforting for your babes — and it can save you both money and space in the nursery. But what do the experts have to say about it?

Dr. Betsy Marks, Internist and Pediatrician in Albany, New York and mom of twins herself, spoke to Romper about the concept of crib sharing with twins. "The bottom line is that the American Association of Pediatrics recommends against newborns sharing a crib with any sibling, and although there is no specific recommendation against crib-sharing with another newborn, such as their twin, there are thoughts that this would be similar to having a stuffed animal or other loose blanket in the crib, which is not recommended," Marks tells Romper.

A statement released by the American Academy of Pediatrics (AAP), entitled "SIDS and Other Sleep-Related Infant Deaths: Updated 2016 Recommendations for a Safe Infant Sleeping Environment," did touch on the practice of crib-sharing (or "cobedding") twins. Written by the Task Force on Sudden Infant Death Syndrome, the statement reads, "The safety and benefits of cobedding for twins and higher-order multiples have not been established. It is prudent to provide separate sleep surfaces and avoid cobedding for twins and higher-order multiples in the hospital and at home." The AAP urges parents to share a room with their twins "ideally for the first year of life, but at least for the first six months" to reduce the risk of SIDS, but to provide each infant with their crib or bassinet.

Despite the AAP's recommendations, some parents opt to keep babies together. Dr. Marks has advice for parents who want twins to share a crib. "If parents choose to do this, there are several things that can be done to make the space more safe and decrease risk of SIDS. The babies should always be put on their backs to sleep and should be separated as much as possible or placed head-to-head. Once they begin to wiggle significantly within the space or roll over, they should be given their own cribs," Marks tells Romper. After all, crib-sharing is not helpful for mom and dad if the babies are waking each other up all night.

Like virtually everything else when you're a parent, deciding whether or not to let your twins share a crib seems to be a matter of opinions and preference. While some take all recommendations from the AAP as law, others believe the comforting benefits for the babies outweigh the potential risk. Lauren Hara, mom of twin girls, opted to follow the AAP guidelines, allowing her infants to bond during other times. "Kids should be in separate beds for their safety," Hara tells Romper. "They can bond during feeding and tummy time."

Whether you're putting your twins to sleep in one crib or two, it's crucial to follow the AAP's recommendations to reduce the risk of SIDS, and to be aware that crib-sharing is not a recommended long-term sleeping arrangement. By creating a healthy sleeping environment for your little ones, you'll help ensure your twin babies sleep safely and soundly... even if mom and dad never manage to get a full night's sleep!