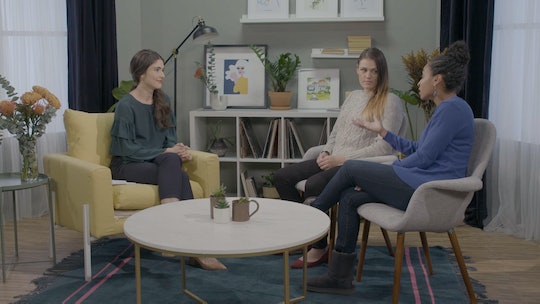 Should We Keep Our Babies Off Social Media? Moms & Experts Debate On 'Bearing The Motherload'

Posting photos of my baby dressed like a tiny Coachella attendee on Instagram is one of the ways I keep in touch with my parents, who live overseas. "She is such a character!" my mum might text me after seeing one in her feed, or she might just leave a red heart emoji on the post. But one day last summer, she sent me a concerned text: "I think you need to take down that photo of Scout." My mum was talking about a photo my husband had posted to his Instagram account of Scout playing with her little brother after bath time. My 2-year-old was dressed in pajama bottoms, but the angle made it look like she was romping about in the nude. I had stumbled into my first social media tar-patch. It raised the question, "Should I post photos of my kid on social or keep them offline?" It's the very topic tackled by the latest episode, embedded below, of Romper's Bearing The Motherload.

As with everything in parenting, it can be easier to make a fundamental choice to just abstain, to ward off all the thorny aspects of technology and social media. And that is the choice that Teana, mother of a 4-year-old daughter, has made, as she tells Bearing The Motherload host Andrea.

Teana explains, "I'm waiting for [my daughter] to become older and become more aware of her image and what she wants to share with the world." She is highly cognizant of her daughter's sense of self, and the ways she might like to control her online image in the future.

While Teana's decision to simply stay off social media does remove the potential for privacy threats, facial recognition, and data-mining by tech companies, mothers and their children have something to gain by cultivating their online life.

For Taylor, who also appears in the episode and has a 3-year-old son, social media is part of her support network, and a way to celebrate her son. "I choose to share photos of King online because I appreciate the beauty and love of capturing a moment," she tells the host.

And she is not alone. Ninety-two percent of American children have an online presence before the age of 2, according to security company AVG.

For that reason, it's worth parents having open discussions about the ways that they use social media, and about how to protect their children while doing so. Eventually, they know, their children will be interested in social media themselves. For Teana, the fear will go from "I don't want to post a picture and find out it was misused by someone that I don't know," she says, to worrying about whether her daughter fully understands the implications of technology. Looking at posts by kids today, "sometimes I wonder," she says, "did someone have a conversation about what they are doing on social media?"

Weighing in on the Bearing The Motherload episode is Linnette Attai, a data privacy expert, who suggests that parents research the platforms so that they can control their data, exposure, and likenesses. Attai believes that open conversation between parents and kids, and an understanding of the pluses and minuses of different social media can help dispel many of the fears we have about technology.

Having considered the different approaches to technology — from the warm, fuzzy aspects to the more worrisome data security concerns — both Teana and Taylor feel they have kept an open mind about the topic.

"Giving him agency" is important, says Taylor, of her son's right to control his image.

"I'm waiting for her to become older and become more aware of her image and what she wants to share with the world," Teana offers.

More Like This
Paris Hilton Is Officially A First-Time Mom
When Does A Baby Recognize Their Father? A Pediatrician Explains
Does The FDA's Plan To Limit Lead In Baby Food Go Far Enough?
40 Valentine's Day Outfits Your Girls Will Adore Showing Off This Season
What Parents Are Talking About — Delivered Straight To Your Inbox