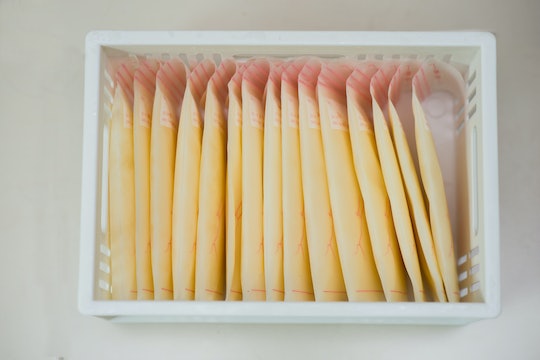 Your baby is hungry — when are they not, actually? You've been rushing around all day and forgot to thaw out their next bottle from the freezer. Instead of being understanding and patient, like a reasonable baby should, your kid will likely get increasingly grumpy, tempting you to take the quick route to thaw your milk in an effort to satiate their hunger quickly. If you're wondering if you should boil frozen breast milk to heat it, you're definitely not the first to ask that question. Boiling is obviously the quickest way to heat things, and since babies aren't especially known for their patience when it comes to their nutrition, it makes sense to want to heat it as quickly as possible. However, learning how to store, freeze, and thaw your milk is as vital as actually feeding your baby, since the methods you use will affect the quality and safety of your milk.

It turns out that boiling your milk might not be the best method for heating it up. According to Medela, one of the leading makers of breast pumps, your milk should be allowed to thaw out slowly, coming to room temperature or a bit warmer. In fact, they went as far as to say that you should never boil or microwave your breast milk for a few reasons.

First of all, and probably most importantly, boiling your breast milk makes it difficult to accurately test the temperature. Parents warned that you could unknowingly overheat it in spots, since milk doesn't heat evenly, which could scald your baby.

Luckily, there are a lot of other, safer, options for heating your milk that don't require boiling or overheating. The quickest method for warming your milk is to run it under warm (not hot) water until it reaches an appropriate temperature. Otherwise, Parents noted, you can set it in a bowl of warm water or let your frozen milk sit out at room temperature until it thaws on its own. Although these options require a little bit of forethought, they're preferable to the alternative consequences of boiling your milk.

So, next time your baby is not-so-patiently waiting for their milk to warm up, remember that doing it safely is preferable to jumping to the quickest option at your disposal.