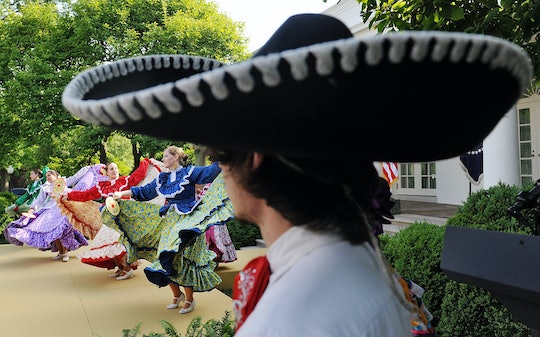 Should You Celebrate Cinco De Mayo?

For members of the Mexican-American community, Cinco de Mayo has become a day to bond, have a good time, and respect a cultural past in relation to the French-Mexican war. If you're not a part of Mexican culture, it may leave you wondering, "should you celebrate Cinco de Mayo?" And that's a good question to address.

In the aforementioned CNN article, UCLA professor David Hayes-Bautista said that Cinco de Mayo isn't as much a Mexican holiday as it is an American one created by Latinos in California during the Civil War. Additionally the holiday has often become an excuse for Americans to drink, party, and throw on a sombrero. And if this is the only reason you're celebrating Cinco de Mayo, then you should forgo partaking and go out for drinks unrelated to the day instead.

If, however, you're truly interested in the culture and historical significance behind Cinco de Mayo, there's no reason that you shouldn't celebrate. There are plenty of ways to celebrate Cinco de Mayo without appropriating it. For starters, learning about the meaning behind Cinco de Mayo is necessary to truly understand what you're celebrating.

Additionally, you want to avoid turning the day into an excuse to have a drinking-fest. Instead, honor the culture and community with authentic Mexican cuisine, as food is a huge part of the Mexican culture and togetherness. Turn on some Mexican music and even grab a drink, but definitely do not do it in a sombrero or fake mustache. Have respect for the community and don't appropriate the day. With the vast diversity the United States is built upon, it's important to support one another but in a genuine manner. So celebrate Cinco de Mayo and have fun doing so, but do it for the right reasons.