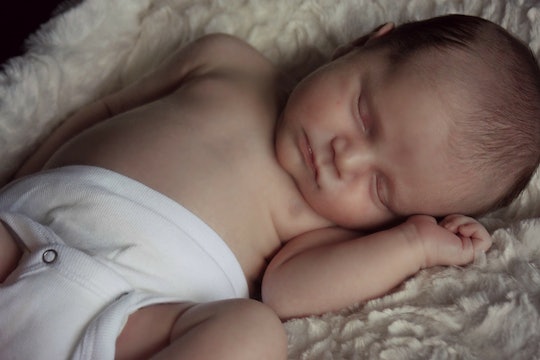 Your baby has been asleep for over an hour and it's been glorious. You've brushed your teeth, showered, done your hair, and you're pretty sure you're a superstar at this point. But you hear something — and it came from your baby's bum. Should you change a sleeping baby's diaper? They smell, but, they're still asleep. What do you do?

More Like This
The Best Dehumidifiers For Every Space In Your Home
Here's What You Need To Know If (When) Your Baby Eats Sand
How Close Are We To A COVID-19 Vaccine For Children?
Can You Sunbathe During Pregnancy?

Getting a baby to sleep can be an epic battle of wills. I know that with my son, when he slept, I was so grateful that the idea of waking him to change his diaper could reduce me to tears. He was a terrible sleeper. Poor guy had acid reflux that just wouldn't quit, and he was displeased. Everything we did revolved around his schedule because he needed routine so badly. To have to adjust said routine because his stomach didn't get the message was devastating.

Likewise, I also didn't want him to develop a painful rash, making sleep that much more uncomfortable, and even less likely to happen, or to develop any complications from his diaper rash. (Which are rare, but his cousin developed an extreme form of diaper rash, and I was nervous.) Also, the smell. Let's not lie. Baby poop smells horrid. Breast or formula — yuck.

But waking a sleeping baby? Eek. Luckily, the American Pregnancy Association noted that changing a baby's wet diaper immediately is not a concern, and that a dirty diaper should be changed as soon as the baby wakes, as to avoid diaper rash. However, according to the American Academy of Pediatrics (AAP) a dirty diaper should be changed at the first opportunity. I know that I don't want my baby to be any more uncomfortable than they need to be, so while I let wet diapers hang out while they rested, because they definitely didn't seem to notice, I changed the dirty diapers.

And I learned a few tricks. The first trick is to keep the room as dark as you can stand — you're not going for perfection in a sleep change, just getting your baby as clean as you can while not waking them up. You also might want to get a wipes warmer. I know, they seem like a stupid expense, but holy cow are they wonderful for nighttime changes. Would you want an ice cold bidet in the middle of the night? The next tip worked for my kids, but it's weird: rub their feet as you hold their teeny, chubby ankles. According to The Independent, that move can help your little ones stay asleep. And the most important of all? Avoid complicated pajamas. If you have to wrestle your baby into an origami swan to get them into their nightwear, you're totally up a creek. In the end, it's all about keeping your baby clean, comfortable, and sleeping, so you can go back to doing the same.