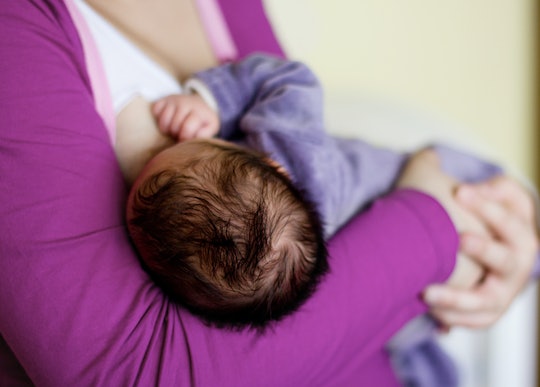 Does Your Baby Need Iron If You're Breastfeeding?

Breastfeeding isn't always easy. It's filled with ups, downs, achievements, and some second guessing, but as a breastfeeding mom, one thing you can rely on is that your milk will fulfill and nourish your baby. But with many pediatricians suggesting that you supplement vitamins and minerals, like iron, to your baby, you might be concerned that your milk isn't all your baby needs. So should you give your baby iron if you're breastfeeding?

Betsy Marks, MD, Board Certified Internist and Pediatrician practicing in Albany, New York, tells Romper that if a mom is exclusively breastfeeding, by 4 to 5 months of age, the iron requirement of the baby may exceed the amount provided by breast milk alone. "It is recommended that around this time, an iron-fortified cereal should be introduced one to two times per day to supplement iron in the baby’s diet," Marks says. "As the baby is eating more food over the next few months, choosing foods higher in iron can help as well."

Iron deficiency seems to be pretty common with little ones. According to the American Academy of Pediatrics (AAP), iron deficiency is the world's most common nutrient deficiency, and breastfed babies, premature infants, and children with special needs have the highest risk. The AAP noted that formula-fed babies have a lower risk of iron deficiency due to their diet of iron-rich cereals and formulas.

While pediatricians and the AAP recommend introducing iron into the diets of exclusively breastfed babies to prevent iron deficiency, there are studies that suggest that not all breastfed babies will need this supplement.

Another study, completed by researchers at the University for Medical Sciences in India, concluded that exclusively breastfed infants of either non-anemic and anemic mothers did not develop any signs of iron deficiency by 6 months of age.

The best bet is to talk to your pediatrician, and possibly test your baby's iron levels. If you or your baby are iron deficient, then following the advice of your doctor, and adding iron-rich foods might be the way to go. If you find that your baby has no iron deficiency, then you may not need to add anything. The key is involving your pediatrician and finding the best solution for your baby. (And maybe eating more broccoli.)

More Like This
Why Does My Baby Cough While Breastfeeding? Experts Explain
20 Weird But Genius Health & Beauty Tools For Babies
10 Ways Breastfeeding Is Good For Moms, Too
Double Your Fun With These Instagram Captions For Twin Pics