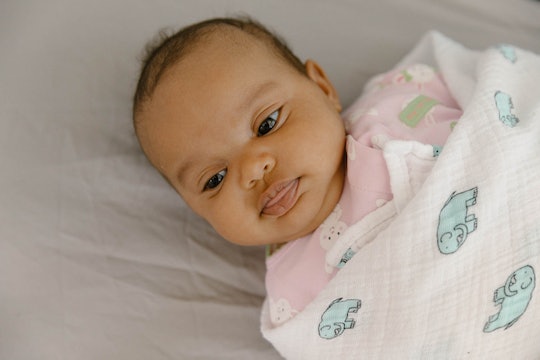 Milestones are wonderful to witness, and sometimes, they're also scary. When your baby first crawls, sits up, walks, rolls over, they're all a bit fraught, you know? You're worried they'll fall over, knock something down, or in the case of rolling over, get stuck or suffocate. The "back to sleep" campaign of the last 20-plus years was overall very successful in educating parents about the best position for babies, but it has many wondering, should you keep your baby from rolling over at night, or should you leave them be?

While sleep positioners were popular for a time, in 2010, the Consumer Products Safety Commission warned parents that they were actually quite dangerous, and led to the deaths of 13 babies due to suffocation. The organization also warned that using rolled up blankets, nursing pillows, and other aids to prevent babies from rolling over were more dangerous than helpful. The American Academy of Pediatrics (AAP) issued a statement that cautioned against the use of these positioners, and instead told parents that if your baby can roll reliably from back to front and from front to back, to leave them be. Otherwise, if you've noticed they've rolled onto their belly in the night, calmly roll them onto their back. But chances are that if they have the strength to roll forward, they have the strength to roll back on their own.

The AAP also warned parents against swaddling after babies can roll over. While it may seem like a good way to keep your baby mostly immobile, and therefore unable to roll over, it's not that effective, and poses a potential suffocation risk if they find themselves tangled in the blanket and lacking the range of motion to roll back over to their backs, or to move their heads sufficiently to get enough oxygen. The AAP suggested warm pajamas or a sleeping sack for babies of that age.

The safest sleeping environment, according to the AAP, is for a baby to be in a crib with a well-fitting mattress that meets or exceeds federal safety standards, kitted out with a tightly fitted sheet made of breathable material. There should be no blankets, pillows, stuffed animals, bumpers, or anything else in the crib with your baby, other than your baby and their pacifier if they take one. The AAP recommends that your baby sleep in your room, but not in your bed with you for the first six months of their life. Ideally, you and baby will room share for the first year. There should also be circulating air in the room, which is another tool in SIDS prevention.

However, there is a worrisome trend emerging wherein parents aren't listening to their pediatricians when it comes to how to put their babies to sleep. A recent study showed that as of late, only about 47.5 percent of parents are putting their children to sleep on their backs in an unencumbered bed, noted CNN. That means that most parents are no longer following the conventional medical advice. A part of me thinks this follows the line of thought of the mothers who choose not to vaccinate their child, turning their backs on a hundred years of longitudinally-studied and researched medical evidence. Another part of me thinks how screwed millennial moms and dads are regarding their time because of our erratic schedules and mountains of student debt, and we're at our wits end, and really need sleep.

So, should you keep your baby from rolling over at night? According to the AAP, there's no safe way to prevent it, so don't try. However, flipping babies back over — gently and quietly — if they're not champion rollers just yet, is a good idea, but don't flip yourself out about it if you wake to find they've rolled over. Just keep their bed clear and put them down on their backs. It's the best we can do.

More Like This
9 Bedtime Mistakes That Are Keeping Your Baby Awake & How To Fix Them
Here’s How Many Calories You Burn When Nursing
10 Ways Breastfeeding Is Good For Moms, Too
How Hot Is Too Hot For Babies? Experts Weigh In