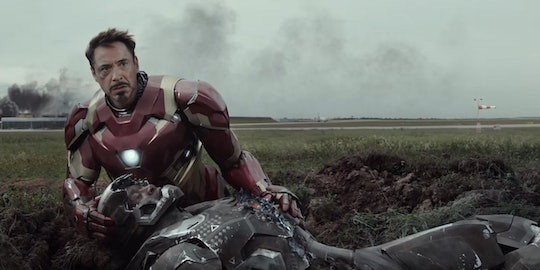 Should You Let Your Kids Go See 'Captain America: Civil War' By Themselves? Maybe Not

Kids love superheroes. So, chances are, they're bugging you non-stop about going to see the new Captain America movie, which has been doing gangbusters at the box office since its debut last week. But given that the whole plot of the movie is basically "superheroes beat each other up," should you let your kids go see Captain America: Civil War by themselves? It depends on the amount of violence you're comfortable with them seeing.

While the PG-13 film doesn't have much in the way of sexual content, and profanity only pops up occasionally, there is definitely a lot of fighting. But it's a far cry from Quentin Tarantino-esque gore. Instead, it's a lot of strong superheroes in various cool costumes punching each other, hurtling into things, and getting up without too much damage, dropping some great quips as they do it. Oh yeah, and don't forget the explosions. There are lots and lots of those. Think violence and destruction on the level of other Marvel movies like Captain America: The Winter Soldier and Guardians of the Galaxy.

That said, there are a few moments that might be more disturbing for little ones, like a quick shot of a bloody dead body in a bathtub, and the idea of collateral damage. When the superheroes fight, it's fun. When civilians die as a result, it's not. Still, despite the PG-13 rating, Christy Lemire at Rotten Tomatoes ultimately deems the movie safe for kids around 8-10 and older.

And the movie has a smart message. The interesting thing about Captain America: Civil War is that it tackles the idea of collateral damage in a thoughtful way. In a lot of action or disaster movies, thousands upon thousands of nameless people die without much fanfare. But in Civil War, the superheroes, lead by Captain America on one side and Iron Man on the other, are fighting over whether or not to sign an agreement with the U.S. government that would limit their autonomy and turn them into peacekeepers, after they have inadvertently injured or killed many civilians during their past battles with villains.

The movie asks whether or not such collateral damage is necessary, a thought-provoking question that will likely be lost on very young kids, but might make an impression on older ones—that is, if they can get past all the awesome fight scenes. That's why it might be useful for you to go with them, as opposed to sending them off by themselves. You could have a really productive conversation with them afterward about power and consequences. And then you can get back to talking about how freaking cool all the action was.