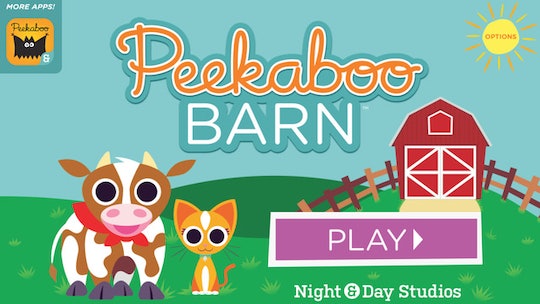 Should You Let Your Kids Play Peekaboo Barn? The App Is Educational & Adorable

Apps for toddlers are flooding the market. Turns out, iPads are perfect for little fingers, and what better time to get kids addicted to screens than when they're most impressionable? In all seriousness, there are a number of great apps for kids to develop different skills and, with the amount of apps out there, it can be a hard market to navigate. Some have risen to popularity because of their touted educational benefits, one of which is Peekaboo Barn. But, even so, should you let your kids play Peekaboo Barn?

If you're not familiar with the app, it's relatively straightforward. It takes your child on a tour of a balloon-y, cartoonish barnyard, where a menagerie of big-eyed farm animals lie in wait. When your child comes upon one they sort of pounce out — hence, "peekaboo" — and make their appropriate noise. At that point your child is supposed to say which animal it is. The cow says moo, the cat says meow, the goat says... bleet? What do goats say? Merriment ensues.

One of the coolest features of this app is that it can teach the animals in a number of languages, and it can even be programmed to speak in your voice in whatever language you like. Depending on the setting, the narrator of the game can be a child voice in English or an adult voice in English, Spanish, Cantonese, Dutch, French, German, Hindi, Italian, Japanese, Mandarin, or Swedish. That foreign language capability makes this app much more valuable and educational.

As far as appropriateness goes, the game is bright and relatively innocuous. It could be played and understood by even the youngest children, though, because of the screen light, that is not advised. Because the game Peekaboo is so well known, and almost intrinsically understood by children, Peekaboo Barn requires very little in the way of explanation. The downside to this app is that it may be too simple. Parents have complained that their children lose interest very quickly and that they don't care to go back to the app after one try. They've seen the barnyard once, and that's enough. Other than the language possibilities, there is little variation or surprise during gameplay. Other complaints include it not teaching enough. Sure, it shows kids what noises animals make, and even what those animals might be called, but it could be teaching more sophisticated vocabulary, or even colors. The white cat could meow, for example.

All in all, the app is a fine momentary distraction, or even a first introduction to a foreign language. Kids have short attention spans, and apps — even engaging ones — don't do much to help that. But at least this one will keep very young kids entertained in a positive way.

More Like This
Dr. Jill Biden Just Delivered Some Frank, But Powerful, Advice On Motherhood
Reddit Applauds Mom Of Five Who Stood Her Ground & Left Sleeping Dad Behind
12 Helpful Tips For Hiking With Kids
15 Adorable CoComelon-Themed Costumes You Can Buy Or DIY