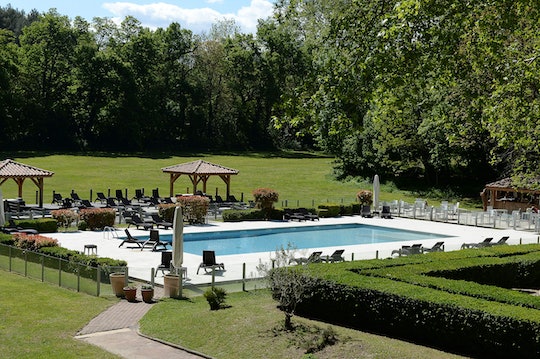 Should You Let Your Kids Take Swimming Lessons If You Live In A Zika-Prone Area?

As the amount of school days left dwindles down and the weather gets warmer, it can only mean one thing. Obviously, it means the summer time is officially here (hello, shorts season) — but perhaps more importantly for parents, it means that swimming season is here as well. Days spent lounging by the pool are now a reality for most moms and kids going into summer break. However, with the outbreak of Zika, there are a good number of precautions to be taken, depending on where you live. So should you let your kids take swimming lessons if you live in a Zika prone area?

The good news: While you might have to double up on the waterproof insect repellant and make sure that the chlorine levels are up to standards, there shouldn't be any problem before diving in this summer. The bad news? According to the Centers for Disease Control and prevention, there have been a total of 426 confirmed cases of Zika within the United States. While those have all been travel associated and not contracted through domestic mosquito bites, there is still a heightened risk for Zika throughout the summer.

The mosquito through which Zika is spread, of the Aedes genus, is happiest in hot and humid environments — which is why there are so many reported cases of Zika in tropical climates, and why places like Florida and other parts of the U.S. South are more at risk. If you live in those areas, be extra careful.

Cases of Zika have recently also hit Hawaii and research has shown that warm southern weather in places above the equator could encourage Zika carrying mosquitos further northwards to states like Georgia and Mississippi as well.

So with all that in mind, should you still let your child take swim lessons? The short answer is yes. You can't effectively give up your kids' social lives and summer activity schedule because you think they might stand a small chance of getting sick — and after all, the CDC's recommended preventative measures work well enough that you probably don't need to worry anyhow.

Make sure that the pool you're taking swim lessons in is properly chlorinated. A properly chlorinated pool will prevent mosquito breeding from happening and will also prevent waterborne illnesses that can be contracted through bacteria in the water. (While mosquitos breed in standing water, they don't breed in chlorinated water.) In that same vein, teaching kids how to swim at the local lake may not be the best idea; The closely monitored community pool is definitely the safest option.

And if you're still concerned about mosquito bites, the CDC gives some great advice when it comes to the perfect insect repellent to ward off Zika. The CDC has previously advised the public to guard against Zika by using EPA-registered insect repellents with the following ingredients: DEET, picaridin, or IR3535. Of important note: The CDC has also warned parents not to use repellent on children under two months and to not use repellents with the ingredients oil of lemon eucalyptus or para-menthane-diol on children younger than three.

Consumer Reports also recently announced the five best insect repellents to protect against Zika which will be incredibly helpful over the next few months of lounging by the pool or spending time outdoors. When spending time outside of the pool, it is also advised to cover up to avoid being vulnerable to mosquito bites.

So use your best judgement before enrolling your child in swim lessons this summer. Make sure the pool you're taking the lessons is being chemically treated and don't forget to double up on bug spray — and sunscreen while you're at it. However, don't let Zika scare you. There is plenty of fun in the sun to be had by all, this summer.