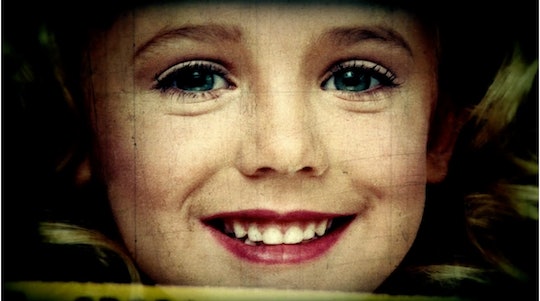 Should You Let Your Kids Watch 'The Case Of: JonBenet Ramsey' Or Send Them To Bed Early?

Sunday night is one of the most exciting nights on television, filled with entertaining programming for the whole family to watch. Sunday night football is a family classic and this Sunday, the 68th Emmy Awards will air on ABC as well. Also this Sunday and Monday, The Case Of: JonBenét Ramsey will air on CBS, and the highly anticipated debut has had people talking for weeks. But should you let your kids watch The Case Of: JonBenét Ramsey... or send them straight to bed?

While it might seem tempting and your kids might beg for some extra TV time, the answer is obvious — you probably shouldn't let them watch it. Long before your kids were (likely) born, the day after Christmas in 1996, 6-year-old JonBenét Ramsey was found dead in the basement of her family's home. For the past 20 years, the case has been in and out of the spotlight; The case was never solved and no one has been charged in the crime. But perhaps that's what has left pretty much everyone fascinated with the case, all these years later — even young kids who may have heard about a spooky story through the grapevine and grown curious.

It is this fascination, after all, that has led to multiple TV specials about Ramsey this year, but The Case Of: JonBenét Ramsey promises to get a new look at key evidence. The Case Of: JonBenét Ramsey will also reportedly name who exactly the team of investigators working on the show believe to be the killer, according to Yahoo. But still — even though the Ramsey case has been the talk of social media for most of this year, does that mean your children should watch the 2-part special airing on CBS tonight and Monday? Again, probably not.

Even though the trailer makes it seem like a very exciting show, it's also unsurprisingly scary and intense. The circumstances of JonBenét's death and all possible theories involve some pretty heavy subject matter — including murder. The last thing a kid needs to see is someone talking about these things on the television and then fear that it can happen to them. (As an adult, even I am afraid that watching The Case Of: JonBenét Ramsey tonight will give me nightmares.)

While The Case Of: JonBenét Ramsey might be talked about among their peers in school, depending on their age, it isn't worth the risk — the show is unrated, according to the Parents Television Council, but consider for yourself the ramifications and make a responsible judgment call. If your kids are still curious, however, you can answer any basic questions they might have about the case — who JonBenét was or how the nation loved her and mourned her passing, for example. But leave the gruesome details for when they're old enough to understand what happened.

If you're dying to watch the special, but the kids haven't gone to bed, record The Case Of: JonBenét Ramsey on your DVR and choose to watch another television program or movie with the family instead. You can catch up later.