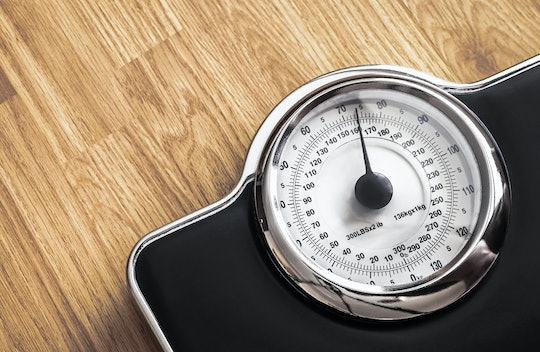 Before I started my pregnancy journey, I was told by my gynecologist that I would need to lose a substantial amount of weight to get pregnant because of my polycystic ovarian syndrome. I thought women like me were the only ones facing an uphill battle to get pregnant or stay pregnant due to our weight and hormones, but recently, there has been more chatter about the relation of pre-pregnancy weight and healthy gestation. So should you lose weight before you get pregnant, or is that really only a directive for specific women?

A few years ago, a study published in the Journal of the American Medical Association (JAMA) found that women who were overweight — even only moderately overweight — were at a much higher risk for miscarriages, complications of pregnancy, and stillbirth. The study evaluated thousands of incidences of stillbirth, miscarriage, perinatal, neonatal, and infant deaths, along with looking at the mother's pre-pregnancy body mass index (BMI). The results of the study were, honestly, staggering and shocking to many women. The research found pretty much suggests that it behooves a woman to be at a healthy weight before becoming pregnant. Nothing says "stress free TTC" like a bunch of doctors telling you to lose weight.

I want to refute this study. I want to beat it down with logic and cries of "But there weren't enough people!" Or, "It's not peer-reviewed!" But I can't. This study is a beast. There were tens of thousands of results, quantitatively analyzed, peer-reviewed, damn fine reporting, and possibility for error accounted for. The research team studied how this could be argued that it's correlation, not causation, because overweight women often have co-morbidities like high blood pressure or poor diet, but the numbers still add up, even if you account for that. Simply put: if you're overweight before you get pregnant, your risks of an adverse result are higher than if you're at a healthy weight.

But, should you lose weight before you get pregnant if you're only moderately overweight? According to the study, yes. The study used your BMI as the measurement of proper weight, and that's a score based on your weight and height. The National Institutes of Health has a calculator here on their website where you punch in your height and weight in either imperial or metric, and it tells you what your BMI is, and if it's healthy. A BMI of 25 or above was determined to be a risk factor for pregnancy, but there was no optimal BMI found. That means, as long as you're between 18.5 and 24.9, you're in the safe range.

As to how you lose weight, as someone who's lost 175 pounds, I will tell you there is no silver bullet. It's mostly just routine. Making it a routine is the hard part, and it's what I am currently struggling with. You see, it used to just be a part of my life. Wake up, eat right, work out, drink water, go to sleep. Now, I find myself slipping back into snacking and slacking on weights. Don't even ask about the last time I drank water. (Hint: only at night from beside my bed.)

Sometimes it helps to have accountability and people you trust to keep you in check, but sometimes, those closest to you can be your biggest enablers. My husband and I are terrible with this.

Talk to your OB-GYN, see what they say about your weight, and how they think you should go about it. Many OB-GYNs work with nutritionists and trainers and they can point you in the right direction. Or maybe you should just start using the time you take to exercise to be alone and do something for yourself, because that's what it is. If only I could convince myself as well.