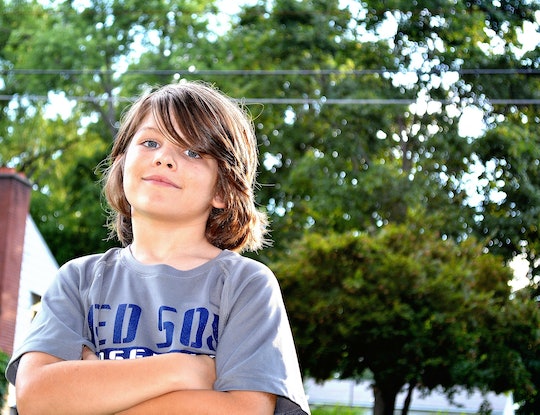 Consider This Before Pranking Your Kid On April 1

It's a rare day that I don't come across an online video of parents pranking their children. The pranks range from kids opening presents only to find an old banana inside to parents standing in their kids' closets wearing a scary mask. Although some kids laugh it off, the majority of the videos end the same way, in a flood of tears. Even if they have a generally good sense of humor, should you play an April Fools' Day prank on your kid this year?

In an interview with The Today Show, child psychologist Dr. David Palmiter said that it really depends on the individual kid. He warned that children who suffer from anxiety and depression, or those who have anger or impulse control problems could have escalated symptoms after a prank. Other kids, however, may think it's funny and look back on it fondly without any long-term effects. Before deciding whether or not to pull a prank on your kids, you must know their temperament and understand their limits.

Additionally, licensed psychotherapist Dr. Stacy Kaiser told The Today Show that parents need to understand the difference between teasing and causing emotional pain. The child's age and the circumstances surrounding the prank should be considered, as well. For example, a teenager whose parents hand her a box exclaiming that they've finally decided to get her a phone can be heartbroken and embarrassed to find two cans and a string inside. Dr. Justin Coulson, a parenting expert for the Australian website Kidspot, suggested that these kind of pranks have the potential to undermine a child's trust in their parents, especially if the prank is being captured on video.

Kids today live in a world where their moms and dads are Facebook friends with the parents of their classmates, their neighbors, and sometimes their teachers. Even kids who enjoy the occasional prank may worry that their embarrassment will be posted online to be seen by their peers. This can cause serious stress and anxiety at an age where kids are already vulnerable. Kaiser acknowledged that most kids will be pranked, teased, or harassed at some point in the real world, and therefore should feel confident that their home is a safe place where no one will hurt them.

If you still want to join in on the April Fools' Day fun, consider light-hearted, kid-friendly pranks, and make sure to leave the video camera off.