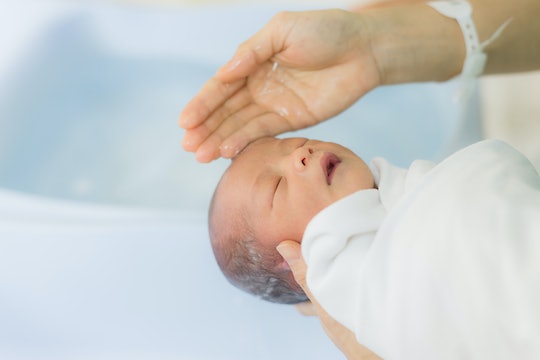 New Moms Want To Know: Should You Put Off Bathing Your Baby Post-Birth?

At one point it was standard practice for newborn babies to be whisked away from their mothers right after birth, if only so they could be "cleaned up" and "ready" to be presented to their parents. Today, however, it's safe to say that most mothers want their babies placed directly on their bodies after birth, so skin-to-skin contact can initiate the bonding process immediately. So that begs the question, should you put off bathing your baby after they're born? While there are varying opinions regarding postpartum newborn baby bath practices (because this is parenthood we're talking about, people) there are a few things every soon-to-be mom should know before she brings her new baby into the world.

When babies are born they are covered in a white substance called Vernix which, according to Parents, is a "thick, white, cheese-like layer" babies are covered in while their skin is developing in the womb. Vernix, Parents reports, acts as a protection, a lube, a moisturizer, and your baby's first blanket. Dr. Ira Jaffe, a board certified maternal fetal medicine OB-GYN practicing in New York City, explained further, telling Woman's Day the following:

"It's important to remember that babies aren't born dirty, the way they're designed to come out is how they should come out."

In addition, researchers have found that Vernix contains substances that create a protective layer that guards your baby against infections, bacteria, and fungi. A 2004 study by the American College of Obstetricians and Gynecologists found that the protective coating on newborn babies contains antimicrobial peptides which can protect against disease. The study went on to sate the following:

"Vernix and amniotic fluid contain an organized pool of antimicrobial peptides with a defined spectrum of bioactivity against common bacterial and fungal pathogens."

So while Vernix might not be the most attractive thing to see on a newborn, delaying your baby's first bath can be beneficial, apart from allowing your little one to continue to reap the awards of the protective elements of Vernix. In fact, a 2010 study by researchers at the Boston Medical Center found that when baby's first bath was delayed by 12 hours there was an increase in the success rates for nursing:

"Delaying bathing a newborn was associated with a significant increase in exclusive breastfeeding rates, which may be due to limiting stress following delivery, when infants are working to stabilize their temperatures."

It's easy to see how, after the drama of birth, a baby may be feeling a little shook up and just wants to cuddle with his or her mom, rather than having a bath right away. But cleaning the baby directly after they're born, or at least before they leave the hospital, may well not be the sole motivator for doctors and nurses to insist they bathe newborn babies. Michael Farmer, head of the Department of Family Practice and postpartum medical director at BC Women’s Hospital & Health Center, told Today's Parent that the first bath is an ideal teaching tool, saying:

"The first bath in hospital is now much more of a teaching and learning experience for the new parents. It is not done for hygiene, but it is certainly helpful for parents to learn how to bathe their newborns."

If you think a practical lesson in how to bathe baby could be useful (wet babies are super slippery, by the way) go right ahead and pay attention during that first bath your baby receives at the hands of trained medical professionals. If, on the other hand, you want to put off baby's firth bath until you get home, know that there are some added health benefits for your baby (and it's well within your right to tell the nurses to hold off with the water and bubbles).