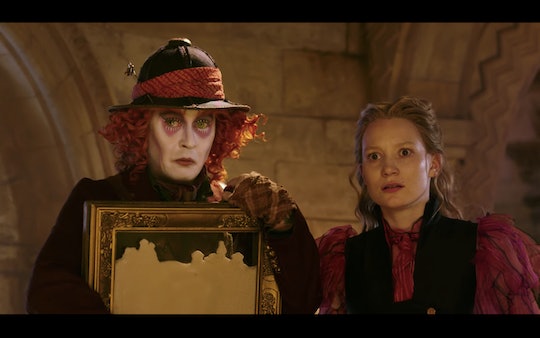 Should You See 'Alice Through The Looking Glass' In 3-D? It's A Colorful, Wild Experience

Alice Through the Looking Glass will be out really soon, and if you like Johnny Depp or Disney, you'll probably be there. Whether you're a Wonderland fan or not, you might be wondering if the 3-D ticket is worth the extra cost. Going to the movie theater is great — but shelling out more than $20 for a show makes you reevaluate your life choices every now and again (do you really want me to choose between a bottle of wine and a movie when I have Netflix?). So do you need to watch Alice Through the Looking Glass in 3-D, or should see it in 2-D and buy that bottle of wine as a celebration of money saved?

It really depends. Hardcore fans of the big-name actors in the film (think Johnny Depp, Anne Hathaway, Mia Waskiowka) will probably want to see Alice Through the Looking Glass right away — and in 3-D — to sate their curiosity. Likewise, if you were completely enamored by 2010's Alice in Wonderland, you'll probably want the full experience of the film as well. In those cases, it makes perfect sense to head to the movie theater and catch the Wonderland sequel on its opening day, in full 3-D splendor.

If you're only passingly curious about the movie, however, this might be one to watch when you're bored on a transatlantic flight, rather than in theaters. Unfortunately, Alice Through the Looking Glass hasn't been scoring rave reviews, and most critics are saying it's not as great as the first film. Through the Looking Glass has been called "a dim and dank hellscape" that "desecrates Lewis Carroll" (Ooh, ouch, Metro) and a film with "a myriad of distractions... so much kitsch and bombast that the human factor here risks being squashed out of existence," according to The Guardian.

Then again, its 3-D effects have also received pretty high praise. The same Guardian reviewer who wasn't too keen on the disappearing plot and characters wrote:

The use of 3D is far more inventive than in most movies blending live action and animation. There are constant switches in size and perspective and its scenes of characters running down corridors or falling from great heights. The colour is luxuriant; the costume and production design are lavish in the extreme.

If you're looking for strong cinematic elements (if you're a film critic), this one might not be worth the 3-D price tag. If you're into a rather psychedelic, colorful 3-D experience of shifting shapes and sizes (or, ahem, you harbor a massive crush on Johnny Depp... who, me?) then the 3-D film is probably worth seeing on the big screen.