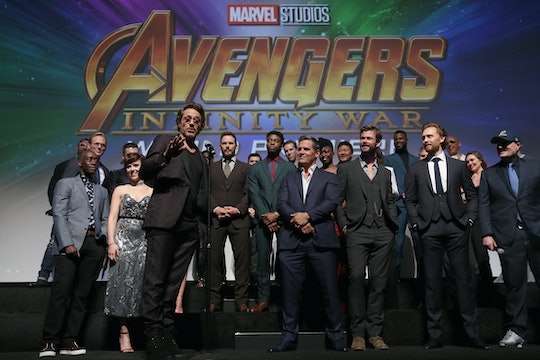 Here's Why You Should *Probably* See 'Avengers: Infinity War' In 3D

While it may still technically be spring, the amount of smash hits currently in theaters is definitely giving off major summer blockbuster vibes. From Amy Schumer's empowering I Feel Pretty, to the artistic and puzzling Isle of Dogs, right now is definitely the time to head to the movies. But with a certain superhero flick getting everyone talking, you might be wondering, should you see Avengers: Infinity War in 3D? Well, it might be a worthy investment.

Obviously, the cost of going to the movies has significantly risen the past decade or so, and the costs of seeing a movie in a 3D theater are even higher. So, the decision of whether or not it's worth it to splurge a little more for those cardboard glasses is kind of a big one. And in thinking about whether to see a movie in 3D or not, there are a variety of factors to consider. Perhaps the most obvious one is if the movie was filmed using a 3D camera. In this case, the answer is no, but that doesn't mean that Avengers: Infinity War shouldn't be seen in 3D. After all, it's already made history as "the first mainstream movie shot entirely on IMAX cameras," according to DigitalTrends.com, so further investigation into this question is definitely needed.

Seriously, the first thing to think about when you're deciding whether or not to shell out more cash to see Marvel's latest release is if the film itself will be any good. Now, obviously plenty of people are talking about it. because it's a superhero movie and attracts all kinds of moviegoers. But, is it actually any good? Well, the answer is obviously yes. Currently, Avengers: Infinity War has an 84% fresh score on Rotten Tomatoes, and 93% of audience members reported liking it. So just by going to see the film, you're practically guaranteed a good time.

But then there are other things to take into consideration. For instance, do you get motion sickness? If so, seeing the latest Avengers movie might not be the best idea. According to CinemaBlend.com, this movie has definitely messed with people's eyes and motion sickness. "Be it the rapid paced action, or even the dimness of the film's picture, there are moments in the first two acts of the film that wonk out in the 3D realm," the site reports. Basically, it's an action movie and action movies can be dizzying when seen in a regular theater, so if you think you might get nauseous or you have in other 3D movies, just see it in standard definition.

But then there's still one more thing to think about if you're planning to see Avengers: Infinity War and want to know if 3D is a good choice: was it meant to be seen in 3D? While it wasn't filmed using a 3D camera, the movie definitely has plenty of merits behind seeing it in 3D. Not only does the movie feature just about every Marvel superhero in existence, the Avengers have to team up to face their biggest enemy yet, Thanos. Critics are loving it, too, so there's no doubt that the movie is good in 3D in theory.

After all, CinemaBlend.com even called it "a perfect fit for conversion and distribution in 3D." But should you see it in 3D? Well, the short answer is a resounding heck yes. But, if you have motion sickness issues or eye problems, it might be best to stick it out in the standard movie theater. Either way, though, you're definitely in for a treat. Avengers: Infinity War is sure to be one of the most talked-about movies of the year, so you definitely want to check it out.