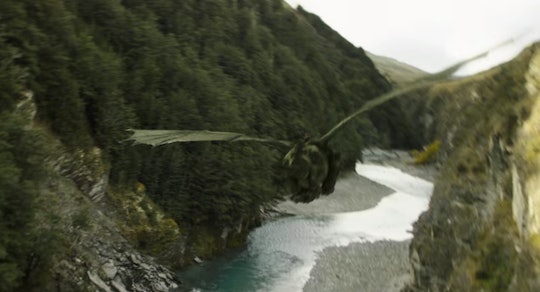 Should You See ‘Pete's Dragon’ In 3-D? The Movie Is Made For It

Watching the trailer for the latest live-action remake of one of Disney's classic movies, viewers will immediately have three questions: Is that dragon furry? Is that Bryce Dallas Howard or Jessica Chastain? And finally, should I see Pete's Dragon in 3-D? First things first. Yup, that's a furry dragon, and the explanation actually makes a lot of sense. "Look, if you put a Game of Thrones dragon in this, it would be scaly and cold, and it would be cool, but I want this to be the kind of dragon who you really want to give a hug to," said writer-director David Lowery at a sneak peek, according to Nerdist. He likens Elliott, the titular dragon, to a 20-foot tall cat. Cute!

Secondly, it's Bryce Dallas Howard, but I only know that because Slash Film said so. I was positive that it was Jessica Chastain, actually, and I literally watched Jurassic World last night. Has anyone actually seen those two together? As for the 3-D, this movie was made for it. It doesn't have all the awkward reaching out towards the camera à la Spy Kids 3D, but there are plenty of bird's eye view flight scenes, spreading fire, splashing water, and swinging dragon tails. If ever a movie called for 3-D, it's this one.

As for the kids, it's perfectly safe. In fact, the American Optometric Association has an entire website dedicated to proclaiming the safety of 3-D movies for all ages. The American Academy of Ophthalmology agrees that despite warnings from Nintendo (which is a video game manufacturer; not an association of medical professionals), there's no reason to worry that viewing 3-D media could harm an adult or child's vision. While some viewers may complain of headaches or motion sickness, that indicates that they're likely suffering from an undiagnosed vision problem, and should visit their doctor for an exam.

That being said, 3-D tickets do cost a few bucks more, and that can add up fast for larger families. And for smaller kids, getting them to wear the glasses might be a pain. Luckily, Pete's Dragon is a movie of actual substance, not just 90 minutes of gimmicks (looking at you again, Spy Kids 3D), so opting for the standard screen won't be a terrible let-down. But those who can swing it should definitely give it a shot. Where else would you get the chance to pretend you're riding a dragon?