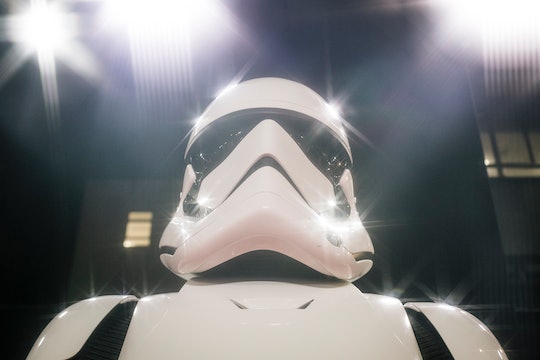 Here's Why You Should Go See 'Star Wars: The Last Jedi' In 3D ASAP

Star Wars fans are in for an early Christmas present, because the latest film installment of the lucrative and long-running franchise is set to debut Dec. 15. Of course, Star Wars diehards already knew that, but what they may not have decided yet is whether to go see Star Wars: The Last Jedi in 3D or to stick to the traditional silver screen. At the end of the day, it all comes down to personal preference, as well as the knowledge that nothing is stopping you from going to see the action unfold in theaters over and over and over again in as many viewing formats as you damn well please, if that's what you want to do. Still, it could be a good idea to get all the facts first to make an informed decision, so let's jump into it.

First, here's what's maybe the most important piece of information viewers will want to know when deciding whether to buy 3D tickets for the first go-round Friday: The film is reportedly pretty stunning aesthetically in terms of special effects, etc., but perhaps a bit complicated when it comes to the actual storyline. As Kristen Page-Kirby wrote for The Washington Post:

...you've got space battles so exhilarating that it's only when you're gasping for air that you realize you were holding your breath. You also, unfortunately, have one too many storylines — which means that one gets short shrift and is therefore rather uninteresting — and there's often a sense of "oh, NOW what?"

She's certainly not alone in that opinion. In summing up a roundup of reviews from around the web for Salon, Rachel Leah observed that it was "unanimous" that "the action, adventure and visuals are astounding" in the Rian Johnson-directed film. But plot and character development may be a bit lacking, as The New Yorker's Richard Brody wrote:

Even the extraordinary cast members have less room here than in "The Force Awakens" to let their personalities show; the movie's cinematic fabric is cut too tight, the frame is too constraining, the story lines hold them stiff and still like so many guy wires.

I don't know about you, but to me that screams, "Go see it in 3D ASAP!" I mean, if the visuals are as superb as reviewers are saying they are, if they really do prove to be the best part of the movie, why not slap in those 3D glasses and experience them to the max? And if you agree, you're in luck, because The Last Jedi will play at 4,175 locations in the United States and Canada come Friday, according to Variety — and 3,600 will host the action-packed movie in 3D.

There's another significant reason that Star Wars fans may want to go big when they catch The Last Jedi in theaters as well. Chief among those "extraordinary cast members" that Brody of The New Yorker mentioned in his review is Carrie Fisher in a reprisal of her classic role as Princess Leia. And, of course, this is her last time playing the signature part, as she died at the end of 2016 shortly after she finished filming. Unsurprisingly to those who have loved Fisher since she first assumed the role of Leia in her early 20s in 1977, reviewers are lauding her "strong presence" in the movie.

Whether you decide to go with 3D or not, it's likely that what you love most about Star Wars will shine through. So, stop by the concession and get a giant order of popcorn and a slushie and settle in for a trip to a galaxy far, far away.