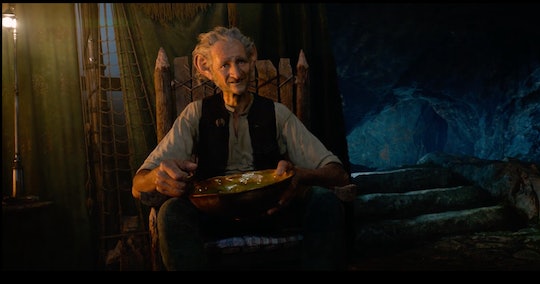 Should You See 'The BFG' In 3-D? It's The Best Way To Watch Roald Dahl's Classic Adventure

Beloved children's author Roald Dahl was not one to shy away from fantastical creatures and creative new inventions. Children from all over the world have read Dahl's stories and watch them transpire in real life images on movie screens, thanks to films like Fantastic Mr. Fox and James And The Giant Peach. But what about the newest film inspired by Dahl's book, The BFG — should you see The BFG in 3-D?

The BFG is being released in both 3-D and 2-D format, so movie attendees have options to weigh before deciding which format is right for them. While I can't make any major decisions for you, I can tell you the benefits of seeing The BFG in 3-D — which premieres in theaters all across the United States on Friday — and why it might just be the best choice.

Just by looking at the trailer, the movie's CGI animation looks amazing. Directed by Steven Spielberg, the film depicts both live acting from real life characters and CGI animated giants interacting with one another and frolicking to strange, animated lands full of giants. This beautiful imagery, that puts Dahl's creative concepts into live action, seems as if it would only be enhanced by 3-D effects. Not to mention, 3-D animation makes viewers feel as if they're a part of the movie — and who doesn't want to be a part of The BFG?

On the other hand, 3-D tickets can be costly. Depending on what movie theater you go to, or what ticket prices are like in your area (which are horrible in mine), attendees can pay up to $15 per 3-D movie ticket. Between buying tickets for yourself and kids, not to mention the added cost of popcorn and drinks — seeing a 3-D movie could cost a pretty penny. 3-D glasses can also be uncomfortable and awkward, especially when you're forced to keep them on for up to two hours. But The BFG might be worth the splurge.

Cinema Blend reviews 3-D films on a variety of categories and has given The BFG excellent ratings. According to the website, the movie is better suited for the 3-D format, putting the size of things in the film — such as the BFG and his human friend, Sophie — into better perspective. Also, due to the film's CGI animation, the 3-D effects don't seem forced or out of place with the animated figures and setting.

With Roald Dahl's concept and Steven Spielberg's direction, there is no doubt that The BFG is going to be one of the most fascinating family friendly films of the year — taking a crazy idea like 24-foot giants and putting them on movie screens. Whether or not you should see the film in 3-D is up to your preference. However, there is no doubt that you should see the film in either format, no matter what.