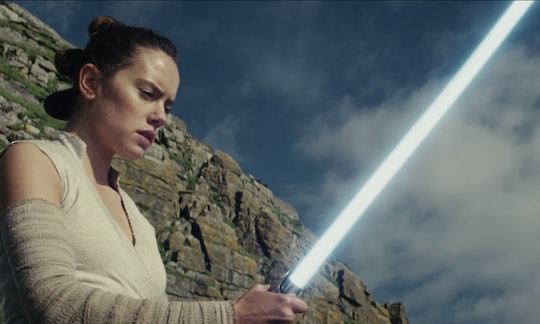 Here Are The Advantages Of Seeing 'The Last Jedi' In IMAX

Fans of Star Wars likely spent the two years between The Force Awakens and The Last Jedi counting down the minutes, and they're going to want to make the most of the new release once it's in theaters. It's always nice to treat yourself to something special, particularly when you've waited a very long time, but should you see The Last Jedi in IMAX? Some may feel that the Star Wars film deserves an immersive experience.

IMAX boasts of speakers so precise you can hear a pin drop and images that are crisp and clear, creating a movie-watching experience that immerses you more fully in the world of the film than ever before. According to the IMAX website, "Every element in our theatres is planned, designed and positioned with exacting standards to create the most intense experience." That can make settling in for an IMAX film sound incredibly appealing, but there are pros and cons when deciding if IMAX is for you.

The biggest issue might be pricing and location. IMAX tickets can cost upwards of $20 for a single movie, so if spending that much is an issue then perhaps it's best to skip out on it. And while there are lots of IMAX theaters scattered across the country, only 10 will be showing The Last Jedi; if one of those theaters isn't near where you live, then you could be accruing some extra charges with travel. It's definitely something to think about, but your finances are your business: if seeing The Last Jedi in IMAX is worth the added expense for you, then it's worth it.

But there are other things to consider when trying to determine if catching the newest Star Wars film in IMAX is something you should do. It all depends on your movie priorities and what matters to you when hunkering down with your tub of popcorn. Are you a huge, lifelong Star Wars fan? Are you the kind of movie watcher who gets enthusiastic about the technical aspects, always seeking out the highest resolution and sharpest sound? Do you fuss endlessly with your TV trying to make the picture better, or can you honestly not tell the difference? If you're like me, even regular movie screens can give you a headache, so it's hard to see the appeal of a gigantic one.

The entirety of The Last Jedi wasn't filmed with IMAX cameras, either; only key sequences got the fancy equipment. That means many of the action scenes are likely to have that full-screen precision that IMAX promises, but regular scenes of characters talking probably won't. It will still look amazing, obviously, but that could weigh on your decision as well.

Certain theaters also provide extras for IMAX viewers, and that might have an impact for you as well. Based on where you're located, there might be a collectible ticket, a poster, or a new print thrown into the deal. Some theaters may offer trading cards or other goodies on opening night, or even a double feature where The Last Jedi follows its predecessor The Force Awakens. Those additional treats could sweeten the pot, justifying the greater cost and making the experience truly worth it.

Ultimately, it's up to you whether or not you should see The Last Jedi in IMAX. If it's not possible for you because of location or cost then don't feel bad about missing out; you'll definitely enjoy the movie just as much on your regular movie screen. And there's always a chance that the extras just don't appeal to you, in which case you can happily save a few extra bucks by going the traditional route. It's a decision based on your preferences, so it's a decision only you can make.