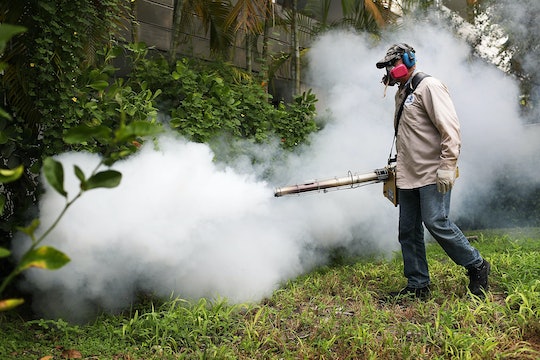 Should You Still Use Mosquito Repellent This Fall? With Zika, It's Smart To Be Cautious

Just in case the Zika virus wasn't scary enough, researchers are now reporting that it may also be spread through eye infections and tears. The news surrounding the virus is enough to make anyone want to take every possible precaution, and now many are wondering if they should use mosquito repellent this fall. Unfortunately, the threat of Zika doesn't immediately end after the Labor Day holiday, so it's smart to be cautious.

A quick refresher: the Zika virus is spread by the Aedes mosquito. Though in most affected people, the virus merely causes some light symptoms like fever and rashes, pregnant women have much more reason to be worried. Zika can cause birth defects, including microcephaly. As the virus began to spread in Florida earlier this year, and Congress took a hard pass on taking any sort of meaningful action to prevent the spread of the disease, the use of mosquito repellant soared. But although mosquitos are mostly associated with the summer, causing some to believe that they can put away that bottle of insect repellent once Starbucks starts selling pumpkin spice lattes again, mosquito season can actually last much longer than one might think. In Miami, the place in the United States currently most affected by the virus, mosquito season lasts, on average, 337 days a year, according to Climate Central.

And Miami isn't the only place with a mosquito season that doesn't end come fall, or even come winter. Climate Central's list of the top 25 cities with the longest seasons of mosquito activity includes plenty of places in beleaguered Florida, like Tampa (285 days) and Orlando (250 days), but also Charleston, South Carolina (219 days) and Norfolk, Virginia (with 190 days). And even in places like New York City, fall can often be a time for increased mosquito bites, as the terrible little creatures seek out shelter inside apartments when it begins to get colder outside, but before it gets so cold that they die.

So if you're worried about contracting Zika, keep putting on that bug spray. Just make sure to follow the guidelines on mosquito repellent given by The Centers for Disease Control and Prevention, so that you're buying effective products, and applying them safely. Use only EPA-registered repellants, and be certain to follow the instructions carefully.

It's a scary time, but it is possible to take steps to protect yourself. And hopefully, soon, Congress will agree to more funding so that we can halt the spread of Zika for good.