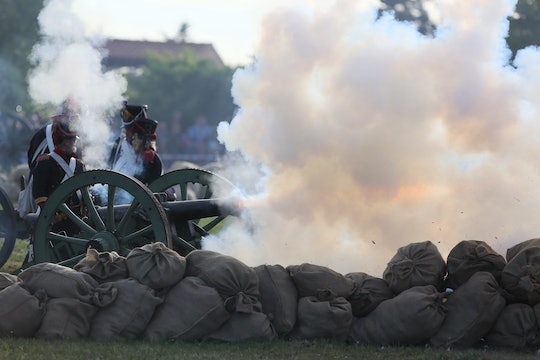 Should You Take Your Kid To A Fourth Of July Gun Salute? There Are Other Options

Fourth of July is just around the corner and moms looking for an all-American tradition to celebrate with their kids may come across the annual gun salute. The gun salute occurs every Independence Day at noon and includes 50 cannon shots with blank cartridges to salute each of the states of the union. But should you take your kid to Fourth of July gun salute ceremonies this year, or skip it altogether?

The ceremony, known as the "salute to the nation" occurs at American military ports. It is a variation on the traditional hand salute, which shows that a person is unarmed. The cannon salute traces its origins to the days when ships would fire cannons when they passed each other. The practice would signal a friendly ship was passing. Today, gun salutes are used to honor presidents and foreign dignitaries. On the Fourth of July, each state is announced along with its nickname, as a cannon fires above in a cloud of smoke. The cannons are each operated by a two-man team. One person loads and another shoots.

While the ceremony is undoubtedly historic, it might be a bit much for young kids. The canons can be very scary for little ones who won't know what to make of the 50 loud booms. Plus, if your kid decides he's suddenly had enough, good luck getting out of earshot. A cannon can emit up to 175 decibles, almost double the sound of a motorcycle engine.

If you kid jumps at the sound of a balloon pop, he might be better off at one of these equally patriotic activities:

You can't go wrong with this Fourth of July staple and almost every major city has a show. The booms of the fireworks may be more suited for little ears, and the kids will love the sparkling colors. If you don't feel like leaving the house, you can always tune in to Macy's incredible fireworks show in New York City.

A parade allows toddlers and kids under five, a opportunity to sing, dance, and enjoy the colorful floats and get-ups. You can't beat the national Independence Day parade down Constitution Avenue in Washington D.C., with drums, horses and drill teams.

A Trip To A History Museum

If you want to teach your kids about American history, a local museum is also a great option. They can learn first-hand about the people who made the United States the country it is today. Museums often offer tours especially for children. These tend to be at a slower pace and include interactive segments.

However you celebrate it, have a happy Fourth of July!