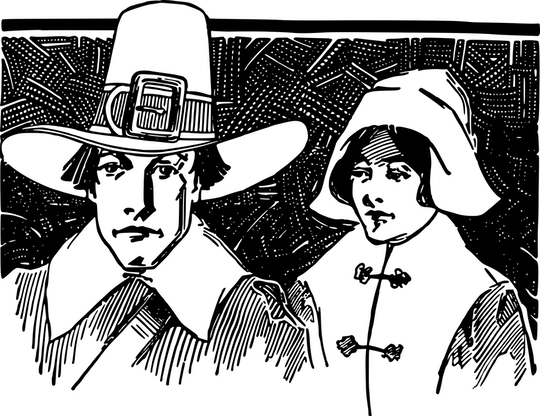 Should You Tell Your Kids The Truth About Thanksgiving? Yes, But Don't Go In Blindly

I was in Kindergarten the first time I'd heard the Thanksgiving story. After cutting out some paper feathers, gluing them to a strip of brown construction paper, and coloring in some flat-top buckled hats, our teacher divided us into two groups – the Pilgrims and the Indians. The Pilgrim group invited the Indian group to join them for some candy corn, popcorn, and orange cupcakes along the long art table. The Indians agreed and, hurrah, everyone became best friends forever. Except we didn't, and years later we were shocked when we learned the truth about Thanksgiving.

The meal most associated with the first Thanksgiving isn't so completely different from what kids have been traditionally taught. The Pilgrims did share a "feast" with the native people, but they didn't offer a formal invitation or serve them turkey and veggies spilling from a cornucopia. In fact, according to Indian Country Today, the Wampanoag tribe only arrived at Plymouth Colony after hearing guns and cannons being shot. They tribe and colonists had previously signed a peace treaty, and the Wamapanoag were afraid the Pilgrims had gone back on their word. When the Natives arrived, fully armed, they learned that what they heard was a celebration of the harvest. They decided to camp out for a few days, which eventually led to the two groups hunting deer and fowl and sharing their game, according to NPR.

This doesn't seem so bad, right? But what about the Plymouth Colony where the feast was held? That was previously the land of the Patuxet which, according to The Huffington Post, was a tribe completely wiped out due to diseases brought to America by the settlers. And, Squanto, the friendly Indian who helped the starving Pilgrims learn to grow crops and fish? He only spoke their language because he'd been abducted and sent Europe as a slave, according to Mayflower History, a site dedicated to the history of the Mayflower passengers. He returned to America only to find that he was the last surviving Patuxet. It's sad, no?

So, should you tell your kids the true story of Thanksgiving? Amber Bennett, author of Stella On Science and a Cherokee descendant, tells me that s a good decision. "Although the Thanksgiving story is a nice story, it would be beneficial for kids to also learn a little bit more about the amazing Native American culture and the contributions these tribes have made to society; including welcoming the English settlers, so long ago," she tells Romper during an interview.

What about those Thanksgiving Day reenactments school children still partake in today? Should teachers stop the practice? That depends on who you ask. For some Native Americans, the idea of seeing white children in Native headdresses and war paint can strike a nerve. Sarah Medina, whose father is a Pueblo Indian from the Ohkay Owigeh reservation wrote in The Bold Italic, that her parents found these reenactments to be a "gross misrepresentation of Native history and a perfect example of modern cultural appropriation." Bennett feels differently, "It does not offend me at all," she says "Young children learn by imitation and play and this is an important piece of American history that, when done respectfully, can be a powerful history lesson into two very different cultures from the past.

What most people can agree on is that children are done a disservice by not learning a more complete version of the Thanksgiving story. Death, kidnapping, and starvation aren't the most beautiful of subjects, but it is the history of our nation.