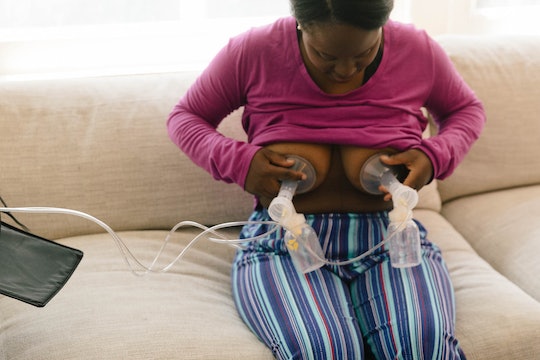 From experience, I can tell you that the last few weeks of pregnancy can seem like they last forever. After I reached, and then passed, my baby's due date, I was willing to try just about anything to get the show on the road. I turned to the internet for answers and found a ton of bizarre advice, including drinking castor oil (pass), sex (yes, please), eating eggplant parmesan (I'm totally not joking), and even nipple stimulation. The suggestions were endless, but should you use a breast pump to induce labor? I mean, how does that even work? According to experts it could be risky, especially if you try it at home or have a high-risk pregnancy.

The American Pregnancy Association (APA) website reports that nipple stimulation, done manually or with a pump, causes your body to release oxytocin, the hormone produced in labor to stimulate uterine contractions. According to the American Congress of Obstetricians and Gynecologists (ACOG), nipple stimulation may work to speed up labor, but only in women with "favorable cervices." In other words, if you aren't already in labor, or well on your way, it may not work. They also note that it has only been studied in women with low-risk pregnancies, so the rules that apply to some pregnant women may not apply to others. Weird, right? It's like all women, and all pregnancies, are different or something.

A Cochrane Review of six studies found that nipple stimulation can significantly reduce the chances of a woman not being in labor after three days, but that there hasn't been enough research to evaluate it's safety for women with high-risk pregnancies. One of the studies they reviewed noted that breast stimulation may have risks, including hyperstimulation of the uterus, which can cause fetal distress. They advise women to definitely not try it without medical supervision.

Romper spoke with two obstetrics providers — Lise Hauser, DNP, APN, CNM, a former adjunct clinical faculty member at the University of Illinois at Chicago, and a certified nurse midwife since 1994, and Dr. Amy Tuteur, a former clinical instructor at Harvard Medical School who has since left the medical field and blogs as the Skeptical OB — as to whether a pregnant woman trying to naturally induce labor via nipple stimulation is, in fact, safe.

Hauser cautions patients against trying nipple stimulation, stating via email, "Nipple stimulation is unlikely to be effective if a woman isn't already in labor to begin with. Also, women should never try to induce labor at home, because they are unable to monitor their baby's response to contractions."

Dr. Tuteur agrees, telling Romper via email, "The best thing to do is for a woman to discuss the option with her doctor or midwife. While there is evidence that it is effective at jump-starting labor, there is also evidence that it leads to perinatal death in high-risk women." She also noted that practice might be especially risky for women who are past their due date, stating:

"One of the factors that makes women high-risk is postdates pregnancy and that's also one of the reasons why a woman might try nipple stimulation to induce labor. So the very women who might most benefit could be at the highest risk for serious complications."

The bottom line: nipple stimulation may work, but it's not 100 percent effective and it may put you or your baby at risk. As always, before you consider induction of labor by any means, you should consult your health care provider.