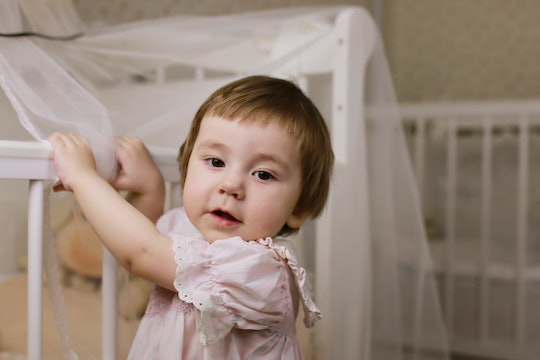 Here’s The Deal With Over-The-Crib Mesh

As parents we want to do everything we can to keep our kids safe, but with many different "safe sleep" products on the market, and constantly changing guidelines, it can difficult to discern the helpful from the potentially harmful. The first time my daughter climbed out of her crib, I was terrified. I wasn't ready for her to move to a bed, but I was worried that she might fall again. I know I'm not the first parent to worry about such a problem, but should you use an over-the-crib mesh to protect your kid and before you transition them to a toddler bed?

According to a study published in Pediatrics, most crib-related injuries are due to falls, leading to 10,000 trips to the Emergency Room each year. A nationwide study conducted just this year and held at the Children’s Hospital in Columbus, Ohio, showed "those ER trips rose nearly 24 percent between 2003 and 2011, after more than a decade of decline." As a result, researchers also found the rate of concussion diagnoses more than doubled between 2005 and 2011.

This is probably not surprising to anyone who has attempted to keep a mobile baby and/or toddler in their crib at night. A child's curiosity, combined with their new climbing skills, can mean that they become nighttime escape artists and, as a result, can rack up a few bumps and bruises.

Baby gear companies market over-the-crib mesh or crib tents — mesh tents that attach over the top of your baby's crib or play yard and zip closed — as a way to keep your adventurous baby and/or toddler from climbing out of their crib. These products are supposed to give parents peace of mind. However, according to Gary Smith, MD and the Director of the Center for Injury Research and Policy, using a crib tent or over-the-crib mesh is not safe, as your child may become entrapped and strangled by the netting.

Because of this risk, in 2012 the U.S. Consumer Product Safety Commission issued a voluntary recall of mesh crib and play yard tents made by Tots in Mind, Inc. after several incidents, including one death involving a 2-year-old boy, who became trapped between the bottom of a tent and the top of his play yard. They also advised parents that mesh tents could easily become damaged and could not safely be repaired.

So, how can a parent keep their daredevil child safe at night, and avoid a trip to the nearest Emergency Room? According to the American Academy of Pediatrics, if your child is 3 feet tall and is able to put their foot or leg on the the top rail of the crib, it's probably time to move your toddler to a bed. When you do, you should attempt to teach your child to stay in bed at night (which is easier said than done), baby proof their room (and possibly the rest of your home), and install an alarm or bell on their door to alert you if they leave their room at night.

Maybe then, and finally, everyone can get some rest.