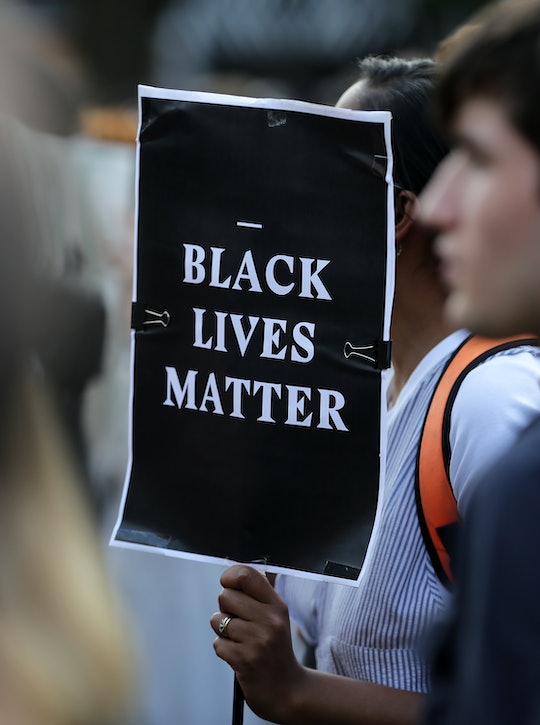 Should You Watch Video Footage Of Terrence Crutcher's Death? It's A Personal Decision

It's gotten to the point where it seems too much to comprehend: another day, another unarmed citizen shot and killed by a police officer. On Friday, Terence Crutcher, a 40-year-old resident of Tulsa, Oklahoma, was shot dead by officer Betty Shelby, who has since been placed on paid administrative leave, according to The New York Times. In the wake of this tragedy, the general public is left with an all-too-familiar question: Should you watch the dash cam video footage of Terence Crutcher's death, which was released on Monday by the Tulsa Police Department? It's a difficult question without a clear-cut answer. At root, it's a personal decision.

In a recent article at PBS, journalist Kenya Downs reported on research suggesting that viewing violent videos of African-Americans being killed by police officers might trigger PTSD-like symptoms in black viewers. Monica Williams, a clinical psychologist at the University of Louisville, told PBS that viewing such footage can result in "a heightened sense of fear and anxiety when you feel like you can’t trust the people who’ve been put in charge to keep you safe. Instead, you see them killing people who look like you."

By all accounts, footage of the Crutcher shooting is disturbing to watch. In a press conference on Saturday, Tulsa Police Department spokeswoman Jeanne MacKenzie summarizes the key moments: “As [the officers] got closer to the vehicle, [Crutcher] reached inside the vehicle, and at that time there was a Taser deployment, and a short time later there was one shot fired,” she said.

PBS News described the video differently, specifying that "Crutcher can be seen with his hands up as he walks toward his SUV as several officers approach him. However, once Crutcher appears to put his hands on the vehicle, it’s difficult to make out what is happening as the officers surround him."

As for why the officers were there in the first place, The Washington Post reports that Crutcher's car broke down while he was driving home from a class at Tulsa Community College. Officers responded to reports of a stalled vehicle, according to police spokeswoman MacKenzie, though Damario Solomon-Simmons, an attorney for the Crutcher family, told The Associated Press says that the officers spotted Crutcher's car while on an unrelated call.

Perhaps the most heart-wrenching account of the video comes from Rodney Goss, a pastor at the Morning Star Baptist Church in north Tulsa, who told reporters at The Tulsa World about the video. According to Goss, Crutcher's "hands were in the air from all views" as officers approached. Goss said that Crutcher "turned toward his SUV." At that point, he was simultaneously tasered by one officer, and shot by another.

Goss said that after Crutcher was shot, “a couple minutes it appears, but it seemed like a lifetime, went by before anyone actually checked with him as far as pulse — as far as whatever the case may be." Goss also emphasized that Crutcher never reached into his vehicle, which contradicts the Tulsa Police Department's account of the incident.

In his statement to the press, Police Chief Chuck Jordan said that Crutcher had been unarmed. No weapon was found in his car.

Within hours of the video's release on Monday, social media was flooded with reactions to the footage, which was caught both by the officer's dash cam, and also by a helicopter that arrived on scene shortly before the shooting. The footage isn't terribly graphic because at the moment of the shooting, the bodies of the police officers surrounding the unarmed man block the camera.

Of course, our definition of "graphic" is relative; The video, at the very least, is less graphic than the video of Philando Castile, the Minnesota man who was shot and killed after a routine traffic stop. Castile's girlfriend, Jeronimo Yanes, live-streamed footage of her mortally wounded boyfriend just moments after the shooting.

Video footage of police shootings has the obvious advantage of serving as evidence in a court of law. Not only might this result in prosecution of police officers, but it might serve as a deterrent: if officers are held accountable for killing people, they might be less inclined to do so. Video footage of these shootings also raises public awareness about the problem of police brutality.

That's the idea, at least. In a recent article at Vox, journalist Dara Lind pointed out that "until they're used as evidence, videos of black death are just voyeurism." As this era of prolific on-camera police shootings continues, we can only hope that the videos will allow justice to be served.