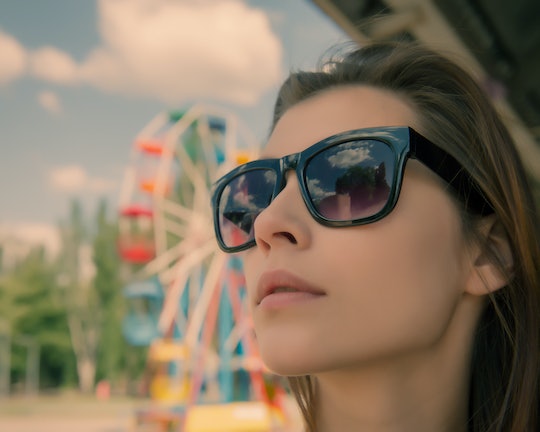 No, Sunglasses Aren't Enough Protection For The Solar Eclipse, & Here's Why

Have you ever seen Little Shop of Horrors? One of the first scenes focuses on a sudden total eclipse, and what does every character do? They look straight at it. No shade at all. Not one person asked, "Should you wear sunglasses during the solar eclipse?" OK, maybe it's because it's a musical and not real life, but the question still stands — do you need sunglasses during the solar eclipse?

Now, while the eclipse isn't going to melt your face like the Ark of the Covenant, it's really not healthy to consider sunglasses as eclipse-worthy protection. According to the Journal of American Association for Pediatric Ophthalmology and Strabismus, looking at the sun, be it noon on Tuesday or during a solar eclipse, puts you at risk for a condition called solar retinopathy. That is the damage done to the retina by the effects of solar exposure. It's painless and cumulative, so while it doesn't feel like you're damaging your vision, you are. It may be accidental, but it's also permanent. (Just like my little brother.)

That means that if you lose a certain percentage of your visual acuity by staring at the solar eclipse sans protection, you're never getting it back. Also, according to a German study, children are especially vulnerable as their retinas are still developing, and they're more sensitive to sun exposure. Are sunglasses good enough? Should you wear sunglasses during the solar eclipse, or do you need something stronger?

Well, as it turns out, sunglasses aren't for looking at the sun so much as for looking at everything else while you're out in the sunlight. According to the American Astronomical Society (AAS), you need very specific glasses for viewing the solar eclipse. (Not to be confused with the American Astrological Society, which could probably choose the best frames for you based on your sign. I'm an Aries, I think I need something bold.)

The proper lenses for viewing an eclipse are rated ISO 12312-2. They're very akin to welding goggles, and the rated numbers are not listed on the package. However, the AAS put together a list of companies which are reputable and sell the properly rated glasses for your viewing pleasure and safety.

Safety first, guys. While your sunglasses may make you feel like a hot celebrity around all the people in the dorky gold eclipse glasses that look like they're for 3D movies, don't judge. Your sunglasses just aren't enough protection during the solar eclipse, and they will likely make you need real glasses at some point if it's all you wear while watching the natural wonder. Listen to science — get a pair of solar eclipse glasses.