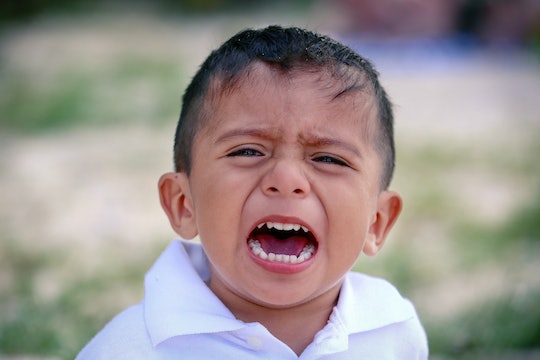 As parents, it's easy to over-evaluate every move you've ever made. You spin the wheels in your head for much longer than you care to admit, wondering why your child does that particular thing he does that you're convinced means he's on the fast track to a lifetime in prison. Dramatic much? Tantrums can be one of those things, and many moms and dads expend a lot of brain energy analyzing the whys behind their kid's tantrums — and what they should do about it. But should you worry about your kid's tantrums? The best advice may actually be to give it a rest.

Montigus Jackson, a Licensed Mental Health Counselor specializing in family therapy in Royal Palm Beach, Florida, tells Romper that tantrum-throwing is perfectly normal behavior for children after their first birthday and up to age 7. If your little hell-raiser is within that age frame, relax and remind yourself that nearly every other parent on earth is dealing with the very same behaviors from time to time. If you have a tantrum-ing kid who is older than 7 and has no special needs, Jackson says, the problem may be that you haven't been diffusing them appropriately.

Everyone's heard it, but always seem to forget it: Tantrums are attention-seeking behaviors. Knowing this, Jackson emphasizes, it's important to remove the child from any onlookers or audience, whether family members or strangers, and to gently yet firmly hold to your resolve without giving in. He explains the life lesson for the child is that, "by not giving in, you condition the child to understand that their actions dictate what they get or do not get in life."

According to Jackson, the biggest mistakes parents make in dealing with tantrums are either rewarding them with exorbitant amounts of attention, or giving in to the child's demands out of exasperation. If you can chill out and take the tantrum in stride as a normal expression of development, while still standing your ground, your kid will realize that tantrums are ineffective and will grow out of them in time. At which point you can look forward to worrying about puberty and breaking curfew.