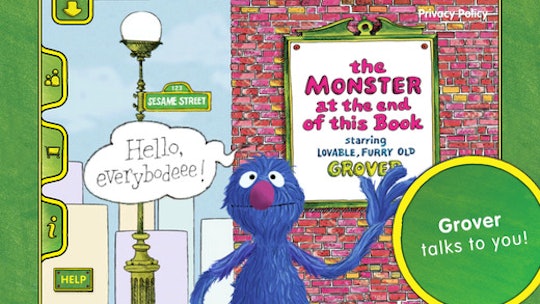 Should Your Kid Play With The Monster At The End Of This Book App? It's A Popular 'Sesame Street' App For Kids

First, let's just all agree Sesame Street is a national treasure that has done immeasurable good providing kids with thoughtful, educational television that teaches them not just about their world, but themselves, too. And Sesame Street has always been a favorite among parents because the non-profit organization behind the show has always taken great care in how they approach exposing kids to marketing messages. Which is why parents who cough up $4.99 to buy a popular Sesame Street app starring Grover have been surprised to see ads popping up during the reading lessons aimed at preschoolers. So if you've been wondering whether your kid should play with the "Monster at the End of This Book" app, the answer is, only if paying for an app with ads for your kids with doesn't bothers you. And if the app user reviews are any indication, there are more than a few parents who aren't very happy about their kids being exposed to ads from such a trusted source.

Another reviewer who identifies herself as "Almost happy mamma" also says her kiddo loves playing with the app, but that she's totally turned off by the ad for Roku "when I paid $5.00 for it."

But the days of Sesame Street being able to operate as a non-profit without advertising is over. Now the show — once widely available for free and without commercial interruption on public television stations across the country — is having to reinvent its entire business model to keep up with an increasingly saturated kids entertainment market. Recently, Sesame Street struck a deal to air it's shows on HBO, yet another sign the times are changing for the Big Bird and his crew. Now ads are slowing creeping across Sesame's Street's growing digital content platforms, and that really shouldn't come as a surprise.

So if you're one of those parents who really tries to keep your kids away from ads, or just feels like a $5 app shouldn't run advertising, The Monster at the End of This Book...starring Grover! app might not be for you. But, then again, Grover is always pretty groovy, the story is a timeless classic, and Sesame Street is still the gold standard in preschool education, so maybe a couple of Roku ads to support the effort isn't that big of a deal. Tough call. But decisions like these are why you get paid the big bucks.