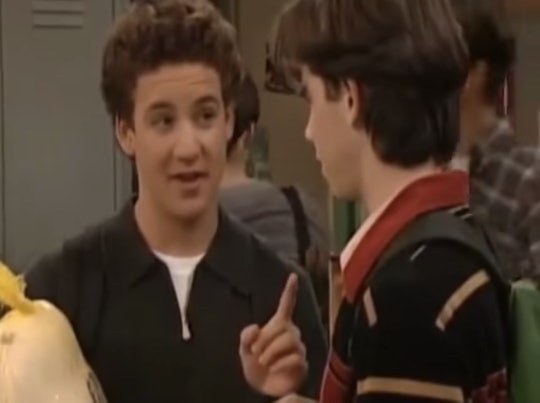 Should Your Kids Watch 'Boy Meets World'? It's A Fun Family Show (Mostly)

If you have kids, chances are they're watching Girl Meets World. The Boy Meets World sequel set ratings records when it premiered in 2014 on the Disney Channel. With its second season dropping on Netflix this Sunday, it'll likely gain even more viewers — and your little super-fans may be clamoring for more of the Matthews clan. But should your kids watch Boy Meets World?

That requires answering two questions. First, is it still any good? Second, is it appropriate? Boy Meets World was a staple of my Friday nights for many, many years of my childhood. I'd climb onto the living room couch with my family, and devour the misadventures of Cory, Shawn, and Topanga. Boy Meets World and Sabrina The Teenage Witch regularly traded off as my favorite part of ABC's TGIF line-up. (It even introduced me to human treasure Adam Scott, although I didn't realize it at the time!) So many things from childhood turn out to be terrible when you look at them with adult eyes — how was I ever so obsessed with The Princess and the Goblin? — but though I've yet to muster the courage to rewatch, Bustle's Henning Fog did, and turned in a rousing reaffirmation of the show's quality, saying that the show still had a "refreshing earnestness" with "a hint of edge." Worthwhile television? Check!

Now, on to whether or not it's appropriate... The thing about Boy Meets World is that it was on the air from 1993 to 2000, so obviously those kooky kids did some growing up over the course of it. The same thing will likely happen with Girl Meets World if it stays on the air for that length of time. A storyline that may have made sense for sixth-grade Cory Matthews wasn't going to be particularly relevant for college-aged Cory. Of course at some point when Cory and Topanga started talking about getting married, he was going to wonder why he had never seen her butt.

I remember watching the wedding night episode with my parents and feeling deeply uncomfortable, while also not quite understanding it. So, perhaps you'll want to hold off on showing your children later Boy Meets World episodes for a little while. But I see no reason not to start them off on the early stuff. It could even enhance their experience of Girl Meets World in a really cool way, helping them see Cory and Topanga as more than just parents. And then you'll have an excuse to rewatch it right alongside them! Although who knows? Maybe now you'll find yourself identifying most with Mr. Feeny.