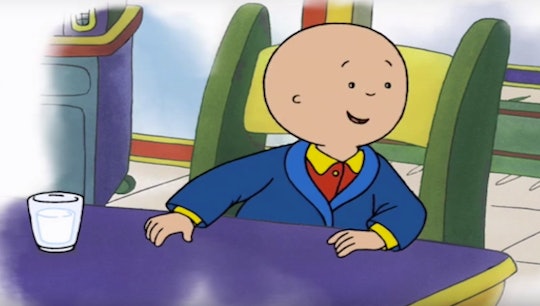 Should Your Kids Watch 'Caillou'? Parents' Reviews Have Been Mixed

Anyone who's raised a kid during the past two decades has probably seen at least one episode of Caillou, as the cartoon is nearing a 20-year run. Focused on 4-year-old Caillou, the show offers snippets of family life and offers a decidedly realistic portrayal of preschool behavior. But for some, it's too realistic. Should your kids watch Caillou? Many parents had mixed feelings about it.

Caillou is often dissected in the blogosphere, but BuzzFeed consolidated the major complaints against the show into a single article, "18 Reasons Why Parents Can't Stand Caillou." Parents' biggest concerns have to do with Caillou himself.

The title character is known for his impetuous behavior. He throws tantrums, sulks, is occasionally unkind to his little sister and is sometimes directly disrespectful of his mom and dad. One can argue that Caillou just behaves like a typical 4-year-old, but parents aren't thrilled when their kids see him as a role model. Reviews of Caillou on the Common Sense Media website reveal that Caillou's behavior tends to rub off on impressionable viewers.

Wouldn't you know it! The one thing my daughter learned from Caillou was how to whine! While there is always a positive message at the end, it is lost in all the whining. This show is a definite no-no in our house.

Another reviewer, Karen1969, wrote that the lack of discipline from the parents compounds the show's ability to be a bad influence:

I agree with other reviewers who complain that their children have begun to whine and be afraid of monsters after watching this show. Mine has done the same, and she also began to say that she "hates" things, and that she "gives up". Plus, what is with Caillou's parents? They never seem to be aware of what their children are up to, and they put up with behavior that doesn't get tolerated in my house, such as tantrums and whiny backtalk!

To some, the character is a a total nightmare. Good Housekeeping even compiled a list of tweets from parents who can't stand Caillou, some of the best being these gems:

Parents have gone so far as to actively prevent their children from watching the show: The blogger behind The Honest Toddler wrote a post on how to block Caillou on Netflix (either by going through customer service or by clicking "Not Interested"). But, despite the negative reviews, other parents have grown to appreciate Caillou. Blogger Mary Tyler Mom of Chicago Now offered a defense of Caillou, arguing that the vitriol directed at the show is unwarranted. She praised the familiarity of the plot lines (which can be as simple as playing with toys or shoveling snow), and expressed support for writers' willingness to let Caillou display his emotions. She also counters bloggers who write that there are no consequences for Caillou's actions:

And I honestly think it is productive and useful to see that 1) all kids misbehave sometimes; 2) there are ramifications to misbehavior; and 3) your parents are not the only ones who practice standards of behavior, discipline, and consequences. Those are things other kids have to deal with, too.

Caillou isn't perfectly well-behaved, but he may still have something to offer kids who are just learning how to navigate the same situations he finds himself in on the show. Another defender of Caillou on the blog Five Uninterrupted Minutes honored Caillou's relatability:

But though it can be a bit cloying, Caillou is a sweet, simple, day-in-the-life of a preschooler done in primary colors. And it’s hard, I think, for children’s TV to hold a mirror up to the daily life of little kids without resorting to too many bells and whistles (like giving them fins, say, or a talking backpack). It’s a good thing that children see children on television as they really are: they get excited about little things, and angry about little things. They go to school, they get along or they don’t, their little siblings get in their way. They’re not mini rock stars or astronauts or explorers, they just dress up like them.

Given the mixed feelings surrounding Caillou, it may be a good idea for parents to watch the show themselves before introducing their kids to it. Full episodes of Caillou are available for free on YouTube.