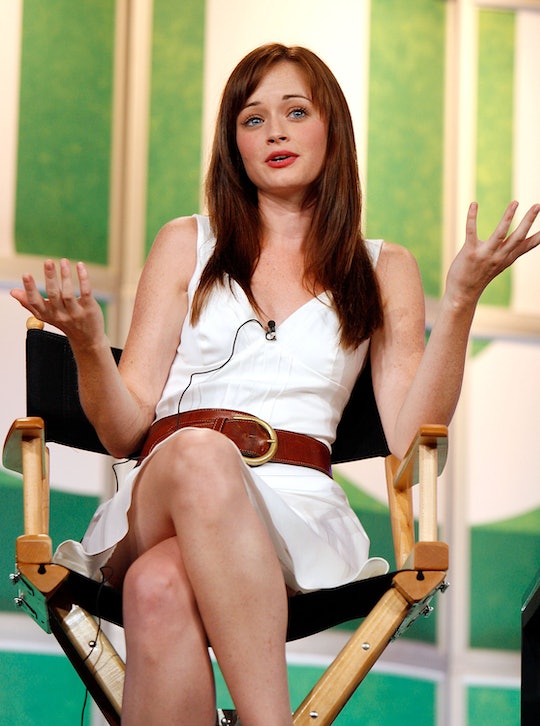 Should Your Kids Watch 'Gilmore Girls'? It Should Still Be The Witty Family-Friendly Show You Remember

It's been a long time since we last visited Stars Hollow, Connecticut — eight years, to be precise — but fans will soon return once more in a Gilmore Girls revival coming to Netflix. Back in October, Gilmore Girls star Lauren Graham, who plays Lorelai Gilmore, teased on Twitter the possibility that the show could come back, but she didn't say for sure whether it would happen. In January, Netflix confirmed it will bringing back Gilmore Girls for four 90-minute episodes in 2016, each named after a specific season. While no official release date has yet been announced, many fans were left wondering: should your kids watch Gilmore Girls?

When Gilmore Girls originally aired, it was rated TV-PG during its run from 2000 to 2007. According to the TV Parental Guidelines ratings system, TV-PG stands for "parental guidance suggested" — used for shows that contain "suggestive dialogue, infrequent coarse language, some sexual situations, or moderate violence." Independent television watchdog groups concurred with the network rating: the Parents Television Council gave the Gilmore Girls yellow lights for sex and language, and Common Sense Media gave the Gilmore Girls an "ages 14+" rating for parents.

So far, it looks like Gilmore Girls will be just like the show you remember — but maybe with some more creative freedom. Warning: Gilmore Girls revival spoilers ahead!

One significant thematic element that will be addressed right away is the death of a major character, after actor Edward Herrmann died of brain cancer in December 2014. Herrmann played a pivotal character on Gilmore Girls as Lorelai's wealthy father, Richard. Actress Kelly Bishop — who played Richard's wife — spoke to TVLine last month, revealing that her character Emily is still reeling from grief after losing Richard:

Well, because of the fact that Emily lost her husband, she’s kind of a raw nerve. In a desperate attempt to push through [her grief], she blows between right on the edge of losing it to almost being a little manic.

The first 90-minute Gilmore Girls revival episode, "Winter," is set to take place approximately eight years after the show ended, and four months after Richard's death. If you're watching the show with your teenager, this shouldn't be that big of a deal, but the subject might not be appropriate for your tweens or younger.

Both single mom Lorelai and her daughter Rory had their share of romances on the original show. Showrunner Amy Sherman-Palladino has revealed that Rory is single and dating when Gilmore Girls picks up where it left off. Fan site Gilmore Girls News has confirmed that Rory will have to choose from one of her exes: but will it be Jess, Dean, or Logan? In video on Periscope, actor Nick Holmes — who plays Robert Grimaldi of the Life & Death Brigade — revealed that the LDB is back in the revival, and that things will certainly be interesting:

I’m very excited for the upcoming episode for the Life & Death Brigade because of the kind of indulgence that can be shown that could not be shown before. It’s very exciting. And very sexy.

It seems like there will definitely be sexy times ahead for the ladies and gents of Stars Hollow — so if you're OK with that totally awkward moment when a sex scene comes on the TV with your kids watching, then Gilmore Girls should be just fine.

The Mother Of All Curse Words

The original Gilmore Girls got away with its fair share of network TV swearing — nothing so offensive that it had to get bleeped by sensors, but just enough to make the show's dialogue feel natural and believable. On Netflix, it can be a swear word paradise (see: House of Cards, Orange Is The New Black), but Sherman-Palladino told TVLine that she doesn't intend to push the obscenity envelope too far with the Gilmore Girls revival, but it's something they're certainly exploring now that they have the creative freedom to do so:

We’re debating that still. The weird thing about Gilmore is… you’ve lived a life with these people and there is a language to them. And the minute that somebody steps out of that it just feels weird. We’ve [written] a couple of lines where we’ve thrown [curses] in and it’s sort of… just feels weird. We’re just trying to find that right balance.

While it's still up in the air about how much and what kind of curse words you'll hear — if you're watching the Gilmore Girls revival with your teen or tween, let's be honest: Anything they're going to hear on Netflix isn't something they haven't already heard from their friends.

The Gilmore Girls revival promises to do its fans justice after a disappointing final season in 2007, making it a nostalgic watch that the whole family can enjoy.