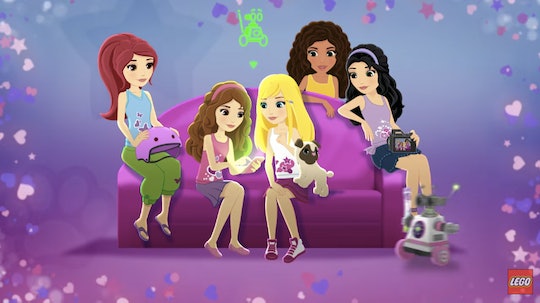 Should Your Kids Watch 'Lego Friends'? It Depends On Their Interests

Lego is known for its primary color building bricks constructing anything a child’s imagination could create — but for a period, they were largely marketed to young boys. Finally, after years of protest from young girls and women who grew up playing with them, Lego decided to start marketing their products to girls too (not that they weren't already). Lego Friends, five adorable dolls with unique backstories, all set in the fictional town of Heartlake City, has since turned out to be one of the biggest successes in Lego’s history — so much so that the company created an animated series to follow the friends. Episodes tackle topics like teenage crushes, competition between friends, and your first day at a new job. They’re supposedly reminiscent of an "average" girl’s teenage years, but some have taken issue with the very pink and girly nature of the products, and, subsequently, the show itself. With plenty of controversy surrounding it, should your kids watch Lego Friends, or is this one a pass?

It’s tough to make that final call and you’ll most likely need to watch a few episodes to be the final judge, but here is what I’ve gathered from watching a few episodes. Lego Friends is different from the classic little yellow man. They are a realistically portrayed group of girls with sparkly eyes and bouncy ponytails, much like Barbie’s younger sister Skipper — and, yes, there’s plenty of pink.

A petition was posted on Change.org four years ago calling on the company to stop distinguishing between toys for girls and those solely for boys. The petition amassed nearly 70 thousand signatures, and even with all the outrage the girly Legos sold like hotcakes leading into the success the animated show. But, if the show supposedly highlights these gender stereotypes, is it okay for some girls, or boys, to like this show while others like shows about superheroes or sports? Absolutely.

Sure, there’s plenty of pink and purple and a little boy drama. But the girls take on the role of a vet and hatch a batch of eggs, play hockey against some overconfident boys and work together to save a trapped foal. And it turns out that these storylines have been a hit with girls.

Toy analyst Garrick Johnson said in an interview with NPR in 2012 that the company had carefully studied the differences between how girls and boys play. “When boys build a construction set, they’ll build a castle, let’s say, and they’ll play with the finished product on the outside,” he told NPR. “When girls build construction sets, they tend to play inside.”

Girls (at least I do and did) tend to pay more attention to detail and so it makes sense that a doll with a unique name and detailed backstory would be a success as a show, having the characters come to life and going through life experiences most girls will experience and some adventures that could happen only in our imaginations. Girls don’t need special Legos or a special series about those toys by any means, but studies and sales show that girls do enjoy them. That being said, some girls have been turned off by the princess-y themes and aren't fans of stereotyping. So, perhaps it’s up to the child’s particular taste in toys and entertainment.

Lego Friends is harmless, even entertaining, and it's cute to watch these girls go on their adventures. But many may still be wondering when Lego will develop a toy — or a TV series — for both boys and girls to enjoy together, with no stereotyping. For that, we’ll just have to stay tuned.