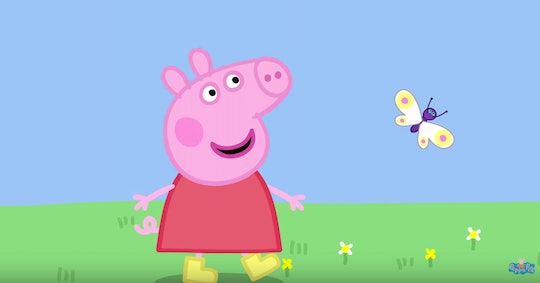 Should Your Kids Watch 'Peppa Pig'? Little Ones Can't Get Enough Of The Popular Pig

A bright pink pig has taken over children's televisions all over the world, from the United States to Australia — and she goes by the name of Peppa. Peppa Pig is undoubtably one of the most popular children's shows of the past decade. While we enjoyed watching Arthur the aadvark from Arthur or Blue, the clue-dropping dog from Blue's Clues, children these days are loving Peppa Pig from the eponymous U.K. TV show. But should your kids watch Peppa Pig, just because it's popular?

The general consensus seems to be a resounding yes, primarily because of the way the show took the United States and the world by storm in the past few years. The Daily Mail reports that Peppa Pig raked in more than $1 billion in revenue in U.S. merchandise sales over the past decade. (Holy moly.) That means parents everywhere are definitely watching the show and loving what they see — enough to go out and buy their children merchandise because of it.

"It's an adorable show with a really strong female character, with a very specific point of view," Terri Weiss, executive vice president of Nickelodeon Preschool told The New York Daily News, in a December 2014 interview. "She's got a tremendous amount of confidence and a real sense of self that I think both boys and girls respond to."

An episode of Peppa Pig, which airs on Nick Jr., generally features Peppa and her family doing fun activities. Peppa loves visiting her fellow animal friends including best friend, Suzy Sheep. Peppa is also very active and enjoys the simple things in life, like her time in the mud puddles. According to The Guardian, Peppa Pig does a fine job at mirroring or even satirizing family life — creating a television show that both parents and children will enjoy.

Common Sense Media, a website that rates programming for children, gives the program a five star review, saying this about the show:

The show's animation is simple and pleasant, and crises revolve around the things that preschoolers worry about: visiting grandparents, playgroups, riding bikes. Strong social lessons about kindness, being thoughtful, and loyalty run throughout each episode.

Some have complained that Peppa Pig teaches their children to to be naughty. The Daily Mail calls her attitude "cheeky" and even claims that some parents claim Peppa is a "bad influence." But for the most part, the reviews are astoundingly positive.

In spite of the naughty claim, Peppa continues to be wildly popular receiving little critique. In 2013, it was voted "Favorite Children's TV Show" by parents in the United Kingdom. In March 2015, the Australian managing director of ABC, Mark Scott, said Peppa Pig was a part of the future of television. "I sometimes say that if you want a sense of television in the future just look at a 3-year-old with an iPad seeking Peppa Pig."

Peppa's next stop on her tour of world domination might just be your hometown. Peppa Pig is going on tour in 2016, performing in cities all over the United States from September to October.

I believe that Peppa Pig is a great TV show, both light and airy, that young children would enjoy. But will your children be one of the thousands who are already in love with Peppa Pig? The only way to know is to turn on the TV and watch for yourself.