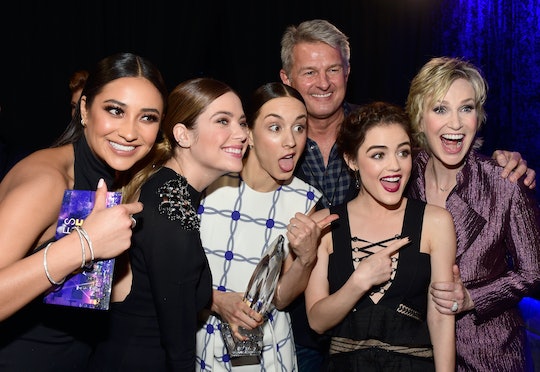 Should Your Kids Watch 'Pretty Little Liars'? It Contains Some Very Grown-Up Situations

Given what's on TV these days, let alone on the world wide Internet, it can be a scary time for parents, and a confusing time for parenting. It's impossible to shield your children from everything, but some things are just not age appropriate. Even a show about teens, ostensibly for teens, may not be the quality entertainment you were hoping for. So, should your kids watch Pretty Little Liars? It really depends on your personal preferences and their age.

For those who are not familiar with the show, it follows the story of a clique of girls whose social circle crumbles when their ringleader goes missing, according to The New York Times. Later, the group is shocked to find out that they've received some messages from a person who is only named "A" and who claims to know all their secrets. This "A" aims to expose them for who they really are to the ruination of their pretty young lives. Surely it's our missing friend, they think. That is, until her body is found. So, okay, if it's not her, who is it? Drama ensues. For seven seasons.

Minus the death and bodies, this has the makings of a great whodunnit that any age could enjoy. Unfortunately, it strays from that straightforward plot. According to IMDb, the twists and turns include almost every racy teen situation imaginable, from stealing, to pregnancy scares, to "getting stoned" references, to sex scenes, to pill-popping, rape, to underage alcoholism, to suicide, to flat-out gore. So, if you don't want your child to see these things or be asking you about uppers and downers, don't let them watch it. The content seems inappropriate for anyone under 16. If you have younger fans, perhaps steer them toward the book series. It's more appropriate for a younger audience and spares us all of the visuals of the show.

If Pretty Little Liars had what critics would call good writing or fine cinematography work, it might merit family viewership where you could talk about what's happening on the screen. But, critics haven't given it great reviews in those areas. So it's riveting at times, but it has little artistic value. What definitely is even more disturbing than the sex, drugs, and violence is the way the teens on the show treat each other. By and large, they are manipulative, distrustful, verbally abusive, ungrateful, judgmental, and cruel.

So, should your kids watch Pretty Little Liars? Probably not. For the younger viewers, it can be frightening and confusing. For the older ones, it can give them the wrong ideas about friendship, love, and sex — all of which are wielded somewhat like a weapon on the show, rather than being treasured. If your older kids do watch the show, you should definitely have normal, healthy conversations with them about safe sex and emotional transparency (like you normally would, you know).