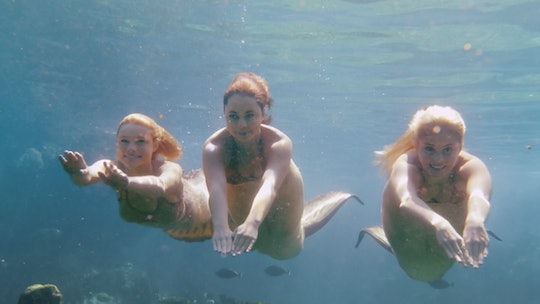 Should Your Toddler Watch 'Mako Mermaids'? It's An Imaginative Netflix Series

If you watched Splash, The Little Mermaid, Aquamarine, or Magic Island while growing up, you're well aware of how magical it was to watch mermaids glide around on screen. (Those tails! The scales! The flowing hair!) You may have even done that awkward mermaid swim at the pool while mentally singing "Under the Sea." Now, Netflix has introduced a mermaid show for kids, which might be a tempting way to distract your own toddler while you tackle a half-hour task on your to-do list. Should your toddler watch Mako Mermaids, and is it an age-appropriate way for you to pass on that mermaid-y magic to the next generation?

Mako Mermaids, an Australian show with three seasons to its name, falls into the "Kids" category on Netflix, but whether it's toddler-appropriate likely comes down to personal decision. The show is about a pod of mermaids who "have had their lives turned upside down by a merman who developed a connection with [Mako] island, posing a threat to their existence. As the mermaids struggle to take back his powers, they discover that his connection with Mako isn’t quite an accident."

Judging by the reviews and trailers, there's some light romance involved, a plot that involves a magical island and a problematic trident, and many shots of a bare-chested merman. Chances are the show might be a bit too complex for toddlers, especially since the plot develops across episodes.

Common Sense Media rates and reviews movies and TV shows for families, so I took a peek at what it had to say about Mako Mermaids. The site states:

The show is geared toward teens, but it's likely to draw in younger fans as well if they're granted access to Netflix. For the most part, the content is conducive to this wide span of ages, save for some tense moments when characters are in danger or fear their magical powers might be discovered. The show does a good job of obscuring the mermaids' bareness when they become human, but Zac is always bare-chested in his marine form.

Parents' ratings of Mako Mermaids on Common Sense Media said it would be appropriate for children aged 10 and up, while children and teens who reviewed the show said it was closer to age 7 and up. Generally, the consensus seems to be that the content is fine for all ages — if you're okay with your toddler seeing some bare mermen chests, mermaids in bras, and the occasional light kiss — but your toddler might not follow the storyline.

If you're still curious, take a peek on Netflix and see how you feel about it. If you're not sure about Mako Mermaids for your toddler, you can always go with the classic The Little Mermaid instead.