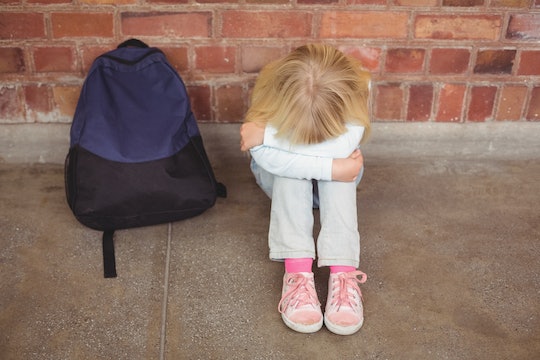 ​Study: Being Bullied By Siblings Could Seriously Affect Your Kid's Mental Health

A large body of research already shows that bullying has long-term health consequences. Kids who are bullied have higher rates of mental illness, physical health problems, and poor school performance. But parents with more than one child may need to be more cautious about the relationships between their kids. It turns out sibling bullying may increase the likelihood of psychotic symptoms, new research shows.

A new study published Monday in Psychological Medicine has found that children involved in sibling bullying face a higher risk of having a psychotic disorder than other kids, according to ScienceDaily. In particular, researchers from the U.K.-based University of Warwick analyzed data on almost 3,600 children from the Avon Longitudinal Study of Parents and Children, and discovered that children involved in sibling bullying either as a victim or a bully are two to three times more likely to develop a psychotic disorder than other children, Science Daily reported.

Senior study author Dieter Wolke, a professor in the University of Warwick's Department of Psychology, said that, until recently, little attention has been paid to bullying by siblings "as a trauma that may lead to serious mental health problems," according to ScienceDaily. Wolke said:

Children spend substantial time with their siblings in the confinement of their family home and if bullied and excluded, this can lead to social defeat and self-blame and serious mental health disorder — as shown here for the first time.

This isn't the first time University of Warwick researchers have linked bullying to an increased risk of having a psychotic disorder later in life. A 2009 Archives of General Psychiatry study, authored by Wolke, found that children who are severely and chronically bullied by school peers are more likely to develop psychotic symptoms such as delusions, hallucinations, and confused and paranoid thoughts, according to The Globe and Mail. Wolke told The Globe and Mail at the time that early episodes of psychosis may trigger schizophrenia in victims who are predisposed genetically to the mental illness.

To that end, the Psychological Medicine study published Monday found that kids bullied by their peers and siblings face an even higher risk of having a serious mental illness, according to ScienceDaily. They are four times more likely to develop psychotic disorders than children who haven't been bullied, the findings show.

First author Slava Dantchev, a Ph.D. candidate at the University of Warwick, said, according to Futurity,

If the bullying occurs at home and at school the risk for psychotic disorder is even higher. These adolescents have no safe place.

Wolke did note in 2009 that the association between bullying and psychotic disorders should be kept "in perspective," according to The Globe and Mail. Although the research shows an increased risk, he said, that "doesn't mean that most of the children who were bullied developed psychotic symptoms." In fact, the 2009 Archives of General Psychiatry study showed that up to 18 percent of severely bullied kids displayed some psychotic symptoms, as did 4 percent of kids who were not bullied.

Still, the researchers advised parents and mental health professionals to become familiar with the long-term mental health impact caused by sibling bullying. Research already shows that children who are bullied are more likely to experience depression and anxiety, health issues, and poor academic success, as well as face a higher risk of dying by suicide, according to StopBullying.gov. By understanding how sibling bullying plays a role in triggering mental illness, parents and therapists can develop more effective interventions that target aggression between brothers and sisters.

Some parents believe that siblings will "grow out" of fighting with each other. And it's understandable why a parent would want that to be true. But, as this research shows, ignoring sibling aggression may have far-reaching consequences, and that's something that needs to be prevented.