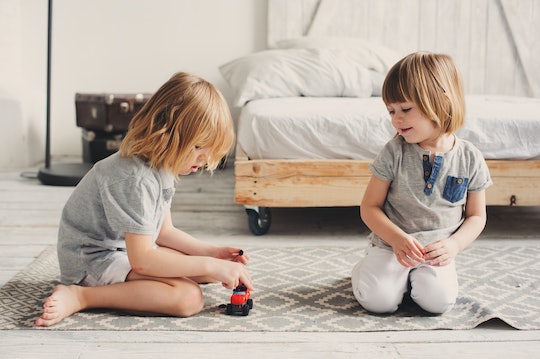 Parents put a lot of pressure on themselves to teach their children about the world and instill in them good values like honesty, integrity, and empathy. But, on that last point at least, some parents get a little bit of help. A recent study found that siblings teach each other empathy, but that's not the only way that brothers and sisters influence one another's development.

Researchers from the University of Calgary, Universite Laval, Tel Aviv University, and the University of Toronto found that children with older siblings who are "kind, warm, and supportive" are more empathetic than those with siblings who don't exhibit these characteristics, according to HuffPost UK. And that's reportedly because older and younger siblings "positively influence each others’ empathic concern over time."

The study, published in Child Development, looked at 452 Canadian sibling pairs and their mothers in order to determine whether measured empathy levels in 18- and 48-month-old siblings at the beginning of the study predicted changes in the other siblings' empathy 18 months later, according to The Conversation. They also examined how younger siblings contribute to their older siblings' empathy in early childhood. And it turns out siblings begin to bring out these traits in one another much earlier than experts previously thought.

Sheri Madigan, assistant professor of psychology at the University of Calgary and the study's coauthor told HuffPost UK that her team's findings are important in understanding childhood development:

Our findings emphasize the importance of considering how all members of the family, not just parents and older siblings, contribute to children’s development. The influence of younger siblings has been found during adolescence, but our study indicates that this process may begin much earlier than previously thought.

In order to gauge empathy levels, researchers videotaped sibling interactions and interviewed mothers. They examined siblings' behavioral and facial responses when a member of the research team feigned distress (by breaking an important item) and pain (after mock injury). Marc Jambon, postdoctoral fellow at the University of Toronto, explained that the role of younger siblings has been underestimated in the past, according to Medical Express:

Although it’s assumed that older siblings and parents are the primary socializing influences on younger siblings’ development (but not vice versa), we found that both younger and older siblings positively contributed to each other’s empathy over time.

This isn't the first study to suggest that siblings learn from one another. Laurie Kramer, a professor of applied family studies in the department of human and community development at the University of Illinois, told Futurity that sibling influence should not be overlooked:

Parents can help to maximize siblings' positive influence by fostering a strong relationship early on, Kramer told the Illinois News Bureau. If they start off on a good foot, their relationships tend to be stronger regardless of factors such as age and gender differences. Past research has found that siblings impact one another's development as social partners, role models, and foils that they use as examples of how not to behave.

Don't worry about your child's development too much if they're an only child, though. The lack of siblings won't keep them from developing socially, according to Psychology Today. Parents just need to be aware of the ways in which they actually gain their social knowledge. Kramer explained to the Illinois News Bureau that only children develop their social skills through interactions with friends and cousins.

The findings on how siblings influence one another helps parents understand how their children develop socially. And, as an added bonus, it takes some of the pressure off of mom and dad to provide their children with every single social skill that they need to get by. Everybody wins!