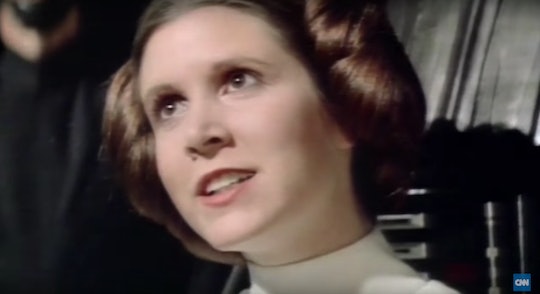 Sign This Petition To Make Leia A Disney Princess

In the wake of Carrie Fisher's untimely death, both her costars and fans of Star Wars have paid tribute to the actress, who was most well-known for bringing Princess Leia to life on screen. Now, fans want to see her legacy further immortalized: they've started a campaign to get Leia another official rank: Disney Princess. You can sign the petition to make Leia a Disney Princess here if you're one of many fans that thinks she deserves the honor — but there are also those who argue that she doesn't qualify.

Fisher rose to fame at just 19 when she took on the role of Princess Leia Organa in a little film called Star Wars that went onto become one of the most epic and legendary film franchises of all time. The character of Leia became an enduring symbol of strength, bravery, intellect, revolution, and (often literally) blasting the patriarchy. The actress who played her became an enduring symbol of those things too, not just because she was associated with Leia, but because she possessed those qualities herself.

For this reason and many more that are elucidated in the petition on Change.org, fans think that Disney should allow Princess Leia to join the official princess club. It's kind of like the Hall of Fame for Disney's most memorable fictional characters, and it got a pretty significant overhaul back in 2000. That was when Disney started actually marketing the princesses as individual franchises outside of their respective films.

Some of Disney's more recent and exceedingly popular films, like Frozen, feature princesses that are wildly popular with audiences but don't have the distinction of being an official member of Disney royalty (Elsa, of Frozen fame, is not).

Traditionally, only cartoon princesses are eligible to be made official, and that's one reason that some argue that, even with her impressive resume of political leadership and other accolades, Leia just doesn't qualify. But those behind the petition feel the rules should change, since Disney has several live-action princesses in its wheelhouse.

There are also Star Wars fans who point out that Leia is, in fact, not just a princess: she's a General, as was revealed last year in The Force Awakens. A title that is, in the Star Wars universe anyway, much more meaningful than princess.

Disney has another Star Wars film in the pipeline, set to be released later this year, and TMZ reported Fisher finished filming her scenes prior to her death. But as the mythology of the films continues, many fans are worried about how Leia's legacy will be handled by Disney — both in the films and outside of them.

Whatever Disney ultimately decides to do, one thing has been made clear as our universe, along with the Star Wars universe, mourns the loss: both Fisher and Leia's legacies will be kept alive by fans no matter what. The force is strong with them.