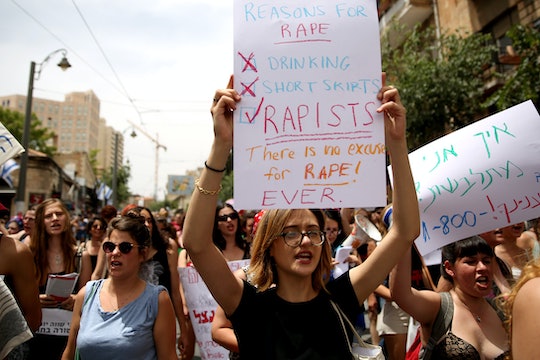 Ever since news emerged that 20-year-old Stanford student Brock Turner was given the lenient sentence of six months in county jail for the rape of an unconscious girl behind a dumpster, the public has been outraged. Between the survivor's devastating impact statement, the bare-minimum sentence Turner received, and the demeaning statement issued by Turner's father, many people are feeling moved to make a difference. If you're wondering how to harness your emotions over the Stanford rape case into something impactful, here's a few Brock Turner petitions and other ways you can help sexual assault survivors.

If you read the Stanford rape case survivor's impact statement, you'll know that she thanked many people that helped her get through the ordeal, which lasted over a year. In the words she wrote to the judge, you can tell the impact that a single person can have on a survivor:

I want to say thank you. To everyone from the intern who made me oatmeal when I woke up at the hospital that morning, to the deputy who waited beside me, to the nurses who calmed me, to the detective who listened to me and never judged me, to my advocates who stood unwaveringly beside me, to my therapist who taught me to find courage in vulnerability, to my boss for being kind and understanding, to my incredible parents who teach me how to turn pain into strength, to my grandma who snuck chocolate into the courtroom throughout this to give to me, my friends who remind me how to be happy, to my boyfriend who is patient and loving, to my unconquerable sister who is the other half of my heart, to Alaleh, my idol, who fought tirelessly and never doubted me. Thank you to everyone involved in the trial for their time and attention. Thank you to girls across the nation that wrote cards to my DA to give to me, so many strangers who cared for me.

You don't have to be an advocating lawyer or a close friend to help sexual assault victims (though, of course, those things help). Here's what you can do instead:

There are several petitions out there that ask officials to review Turner's case or implement longer sentences for his crime:

There's now a website, a petition, and a lot of support to have the Stanford rape case judge, Aaron Persky, recalled. The associated website explains the reasoning for wanting Persky to step down (whether that's voluntarily or otherwise):

The statutory minimum sentence was 2 years. The judge had to make a special exception and depart downward dramatically to hand out such a light punishment. The judge found that the case had 'unusual circumstances' justifying probation based primarily on the fact that he had previously been high achieving, on the role of alcohol, and on letters from the perpetrator’s high school and swim team friends claiming that he had 'good character.'

Oh, and there's another Aaron Persky petition. People are very unhappy with this judge.

Volunteer Or Donate At A Sexual Assault Help Center

There's some amazing sexual assault resources out there for survivors — but, as is the case with many fantastic non-profits, there's never quite enough resources. Volunteer your time at a sexual assault helpline, help center, or organization in your community. Search for one that you agree with, that needs help, and whose requirements you can meet, then get started.

If you have limited time but do have funds available, you can help out just as much by donating, whether on a one-time or monthly basis.

Speaking out about sexual assault is a terrifying ordeal in and of itself. Being labeled a liar on top of that makes an unimaginable situation even worse. Not to mention, when you voice your doubts about a survivor's story, you're not only harming that single survivor — you're sending the message to other victims that they might not be believed, either.

Call Out Rape Culture When You See It

The occasional rape joke by your immature college friend might seem harmless, but it contributes to the rape culture that made Turner's six-month jail term acceptable. If your buddy says a girl in a short dress is "asking for it" or someone posts a rape joke on Facebook, or even when someone says "my football team got raped," call them out on it.

Support Survivors In Every Day Life

This can mean many things, in many different situations, but it basically means being there for survivors. That can mean supporting your friend after she's been through a sexual assault. It can mean stopping a potential date rape, as three women in California did: they saw something shifty and then did something about it.

There's many ways to help sexual assault survivors, whether by signing a petition right at your computer or volunteering at a center in your community. Even by changing our language and standing up against rape culture, we're making a difference for the next generation and letting it be known that we do not live in an apologist society, that we believe survivors, and — perhaps most importantly — that we care.