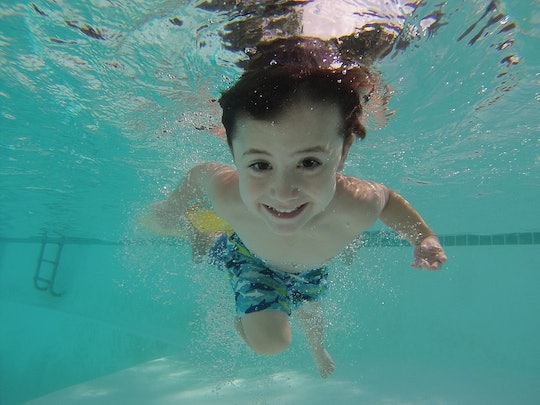 Signs Of Dry Drowning Every Parent Should Look For

The term itself sounds confusing, contradictory even. Dry drowning gets its name due to the fact that the symptoms take place out of the water, as in on dry land. Since the signs of dry drowning take place after swimming, it's easy to confuse these clues for other, less serious conditions. But due to the serious and fatal effects that can result from dry drowning, every parent whose child is exposed to water needs to be aware of the warnings signs.

Simply put, dry drowning occurs from fluid in the lungs that is swallowed when kids are in pools, oceans, and even bath tubs, according to Parenting magazine. Because you may not see your child ingest the water, it's possible you won't be considering their potential for dry drowning. As What To Expect pointed out on its website, dry drowning can occur a few minutes or up to three days after the water has reached the lungs. The reason for such a drastic time frame is the body's response to the excess fluid, and how fast or slow an individual's body will react.

As Parents magazine reported, the water in the lungs causes swelling, which makes it hard for oxygen to get to the blood and travel through the body. Once the oxygen transfer slows, the body can experience lack of oxygen to the brain, which is responsible for most of the symptoms associated with dry drowning, according to the Infant CPR website.

If you believe your child may have swallowed enough water to be at risk for dry drowning, look for the following symptoms:

With the season of pool parties and beach trips drawing closer, being prepared and knowledgeable about potential hazards can be the difference between life and death. As Today's Parent pointed out, although dry drowning is rare, the symptoms should be taken seriously. The best thing to do is keep a close eye on your kids — while swimming and post water activity — and head to the ER if you believe your child is in distress.