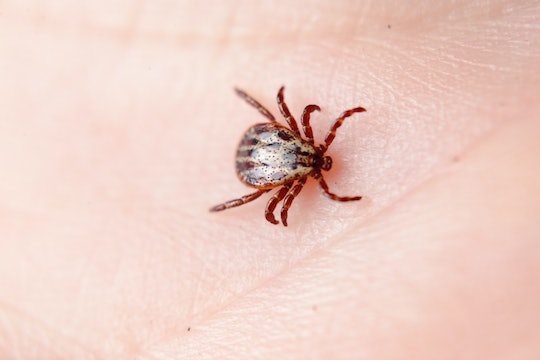 From Suspicious Rashes To Headaches, These Are The Early Signs Of Lyme Disease

I was born and raised in Maine, so the threat of mosquitos and ticks has always been a part of my life. The smell of bug spray reminds me of summer, and I check for ticks in every crevice all summer long as a force of habit. But what is new is the growing threat of really scary diseases passed along by those awful biting creatures, from Zika to West Nile and, the topic at hand, Lyme disease. If you haven't learned them already, you'll want to brush up on these signs and symptoms of Lyme disease, because you'll want to pick up on it quickly in order to get treatment started.

The signs of Lyme disease can be varied, but usually include a rash like a bull's-eye, fatigue, and achey joints, according to the Centers for Disease Control and Prevention (CDC). Dr. Kenneth Liegner, a Lyme disease expert and doctor of internal medicine in New York, explained in an interview with Romper that the tick-borne illness can be very tricky to spot and diagnose, even for the experts. Because the symptoms can mimic the flu, he said, "History is extremely important. What risk has the person been at? Have they been in habitats where they might have been exposed to ticks? Do they have indoor/outdoor pets that might be bringing ticks in to the home?" If you answer yes to those questions, flu-like symptoms in the summertime, achey joints, a severe and persistent headache, or even Bell's palsy, which is a weakening of the side of the face, should point you in the direction of a doctor to be checked for Lyme disease.

There's another red flag that one may have been bitten by a tick (if you didn't notice already), and that's the appearance of "a red skin rash that expands beyond the size of a 50 cent piece," explains Dr. Thomas Mather, professor of public health entomology at the University of Rhode Island, and director of the TickEncounter Resource Center. The rash itself doesn't necessarily mean that the bite was from a Lyme-carrying tick though. "Frequently, people are bitten by ticks that are not even Lyme disease carriers and they may see a dime to quarter-sized red mark at the tick bite site that appears in the first 24 hrs," said Mather. This initial bite often gives people cause to worry, he elaborated, but the rash itself just confirms that there was a tick bite, not that Lyme is present.

To confirm if the tick is carrying Lyme, you can get the insect checked. This does need to be done quickly, however, because if you are at risk of contracting Lyme disease, the antibiotic treatment has the best chance of working within three weeks of the bite, Healthline explained.

If you've been bitten by a tick and still have the bugger in your possession, you can get a relatively quick assessment through TickSpotters. Dr. Mather explains the process: Take a clear picture of the tick and save the insect in a Ziploc or other resealable zipper storage bag. Send the photo to TickSpotters and they'll connect you with a tick expert. Within 24-36 hours, you'll receive a free confirmation of the type of tick that bit you, a risk assessment for Lyme disease, and suggestions for the next best actions to take.

Healthline reported that the number of cases of Lyme disease in the United States is increasing each year, with approximately over 300,000 cases reported annually. The geographical area of Lyme disease has also increased, reaching almost all of the states in country. If you and your kids find yourselves outdoors this summer, make sure to check for ticks regularly and get checked by a doctor if any of these symptoms arise following a tick bite.